I have a weakness for Starbuck’s Cranberry Bliss Bars. They only serve them in their stores this time of year and I can never wait to get into the stores and buy one. Last year I posted a very similar version of their beloved bliss bars that I had found from Taste of Home. But I love the combination so much, I thought it would be a lot of fun to make them into my newest obsession. Cinnamon rolls.

I make cinnamon rolls at home probably way more than I should. Ever since I got over my fear and made them back in June at my friend Lisa’s Hospitality & Cooking class, I’ve been kind of hooked. So many different things you can do with them. 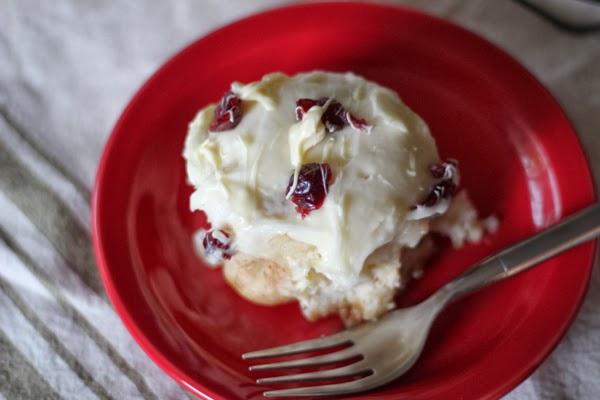 I mean, c’mon! Doesn’t a Cranberry Bliss Cinnamon Roll just sound completely amazing?! As soon as I got the idea in my head, I couldn’t escape it. I was dreaming about them constantly. And let me tell you, these are even better than the ones I dreamed up!

You can eat these for breakfast. You can eat them as a snack. You can even eat them as a dessert. You just have to make these! And this recipe makes a ton of cinnamon rolls. So make sure you share a pie plate with someone you love. I saved one batch for us and gave the other plate to my in.loves. since they were all kind of sick and under the weather. 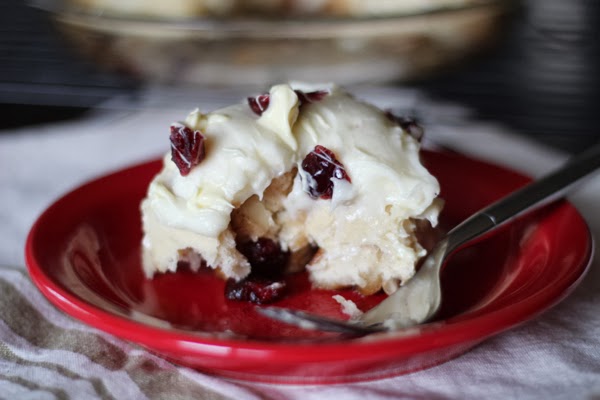 Cranberries, sweetened cream cheese, and smooth white chocolate wrapped up into a cinnamon roll. The only thing better than one pie dish of this is having two pie dishes full so you can share!

these look delish. I love the topping!

Thanks, Dina! White chocolate and cranberries are kind of a perfect combination.

Thank you for stopping by Karen! I'm going to check out your tart because I adore tarts and with Cranberries, I bet it's amazing!

Wow this is such a fabulous idea! Cranberries make everything amazing. I've got them on the brain recently, I just posted a cranberry tart today...and I think these are next!

These sound so amazing!! Sharing them on my facebook page tomorrow morning!