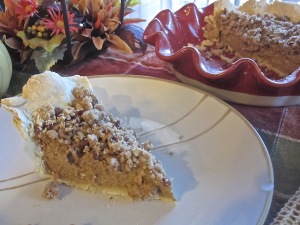 My husband has a thing for apple butter. He also has a thing for pie! I’m not really a fan of apple butter and I’m learning to have an appreciation for pie. I do however, love anything pumpkin! Since I’m determined to become better at mastering the art of pies, I thought this would be a fun dessert to make.

I have to admit, this pie is really quite delicious! From the flaky crust, to the sweet filling, to the savory crunch of the streusel topping, this pie is really really really outstanding! It screams FALL at the top of it’s lungs and I think preparing a pie for someone is so special. I rarely ever make pie for dessert. I prefer to make cookies, and little parfaits…but pie is so elegant and I think people appreciate the extra work that goes into making something so beautiful and tasty. In fact, I’m thinking about making this again for Thanksgiving because it’s kind of a show stopper with it’s fancy crumble topping!

Since this pie is dressed to impress, make this for someone you love! 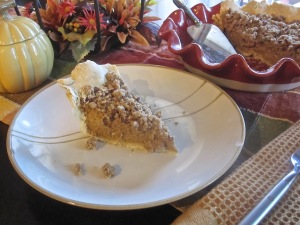