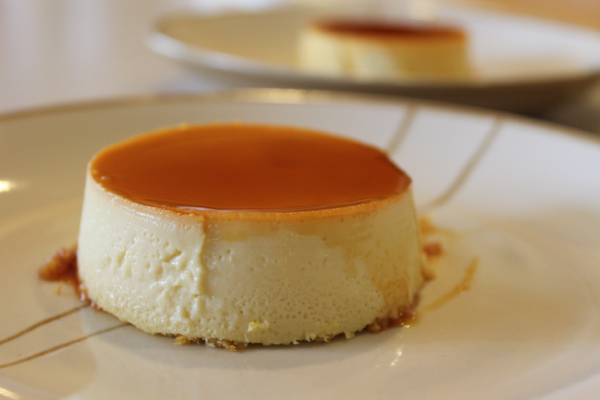 Okay, of all the Latin-themed dishes we make here at Catz, this is easily one of my favorites. For one thing, it’s a Latin dessert. We don’t make many of those (I’m not brave enough to deep fry ice cream yet!). Secondly, it feels adventurous when you’re making it, but it’s actually really easy and quite difficult to mess up – it came out basically perfect the very first time I tried it. How one comes up with a recipe this foolproof and tasty for something that can be as tricky as flan is beyond me, but we have someone named “Beth” at Allrecipes.com to thank for it. I’ve made some modifications each time I’ve made it, but they are relatively minor. All in all, I’d be hesitant to mess with this formula too much – it’s basic, but it is so good! 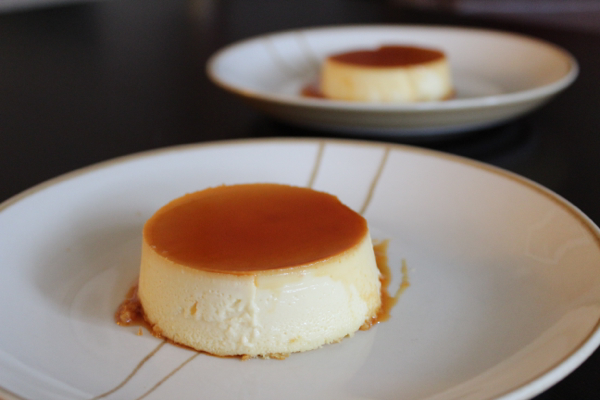 Let’s talk flan for a moment. In some ways, flan is the best of many worlds when it comes to desserts. It incorporates a satisfying amount of sweetness, but not to the point of being overwhelming. It’s beautiful to look at, but in a simple, elegant way, not an ornate one. It certainly carries the characteristics of custard, but it literally “stands” on its own, setting it apart from mere pudding. Believe it or not, flan’s origins are not Latin American, but Roman. The ancients prepared flan as a savory course, focusing primarily on finding an elegant and versatile way to serve eggs. With the conquest of Spain (the Iberian peninsula at the time), flan spread throughout the European continent, and was eventually carried to Central and South America (and Mexico!) by the conquistadors and those that followed them. It is believed that the Spaniards oversaw the evolution of flan into a sweet dessert, with the Mexican culinary culture perfecting the version we know and love – a custard-like structure with a caramelized sugar topping.
My understanding is that many different varieties and flavors of flans exist – almond, cinnamon, pistachio, chocolate, and pumpkin are a few of the examples I have heard of. Personally, I’ve only ever prepared and partaken of the traditional Mexican flavor – vanilla. This recipe is for a vanilla flan, of course, but I see no reason you couldn’t get creative and substitute some quality almond extract in place of the vanilla extract, for starters. I’m planning on giving it a shot myself soon! In the meantime, though, this is the perfect compliment to finish off any Latin-themed meal. Next time you serve tacos, enchiladas, burritos, chimichangas, tortas, or flautas, try this as your dessert! Here’s a disclaimer: if you’ve grown up making traditional Mexican or Spanish flan, or you’ve perfected your authentic flan-making skills over the years, this recipe is probably not for you. However, if flan is something you’ve only ever ordered at Chevy’s or salivated over at your local Mexican restaurant, this is a great way to get comfortable serving up a special Latin treat.
The flavor you’re looking for in this recipe is predominantly vanilla. I’ve increased the vanilla extract in this recipe 50% from the original as I’ve experimented with it, and I think this is the sweet spot between hints of vanilla and overwhelming vanilla. If you decide to try another flavor, you’ll probably have to start from ground zero as far as figuring out how much to use. The ingredients are so simple and inexpensive (other than the vanilla), you can certainly try it out multiple times.
I always prepare and serve my flan in ramekins as individual portions. There a couple of benefits to this. First, it’s really cute (hey, what can I say?). Secondly, it cooks faster and is easier to transfer to a plate without destroying. Lastly, it makes it really easy to determine exactly how many you’re goingto be able to feed. All of that being said, one large flan makes for a very impressive presentation, so if you feel ambitious, make the appropriate modifications and go for it. Keep in mind that ramekins are all slightly different sizes, so you may have a bit of the flan mixture left over. 2/3 cup of sugar makes enough caramel sauce for about six ramekins that are three inches in diameter, but the flan mixture would probably fill about eight that size. I only have six, so I didn’t worry about it, but if you have more, I would use a full cup of sugar for your sauce. 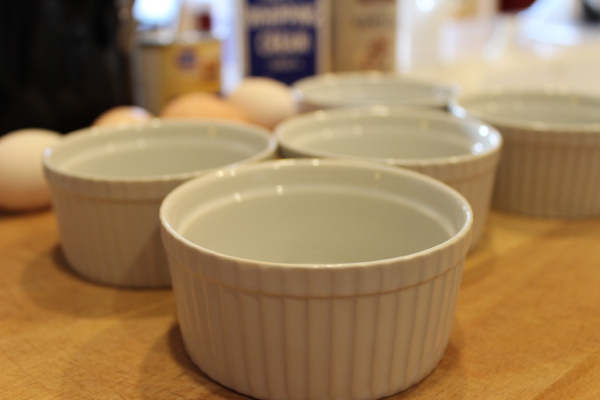 One last note before we get into the recipe. When you’re making the caramel sauce, resist the temptation to stir. Swirl, shake a bit, lift from the fire as needed, but don’t stir. It only makes the sugar start tocrystalize, and you’ll have toremelt it. You’re really going to feel like you should stir (unless you’ve done this before), so maybe have a second person stand with you in the kitchen during that part for the sole purpose of keeping spoons out of your reach. Just a thought! 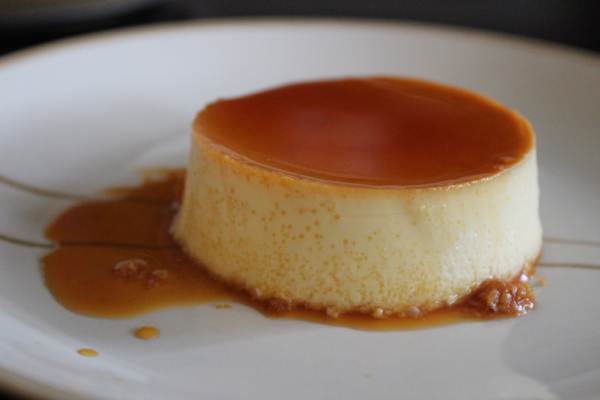