Skip to Content
94 shares
Jump to Recipe
Just as good today as it apparently was at the Waldorf Hotel 120 years ago – just easier now – you’ve got to whip up this easy eggs benedict recipe! 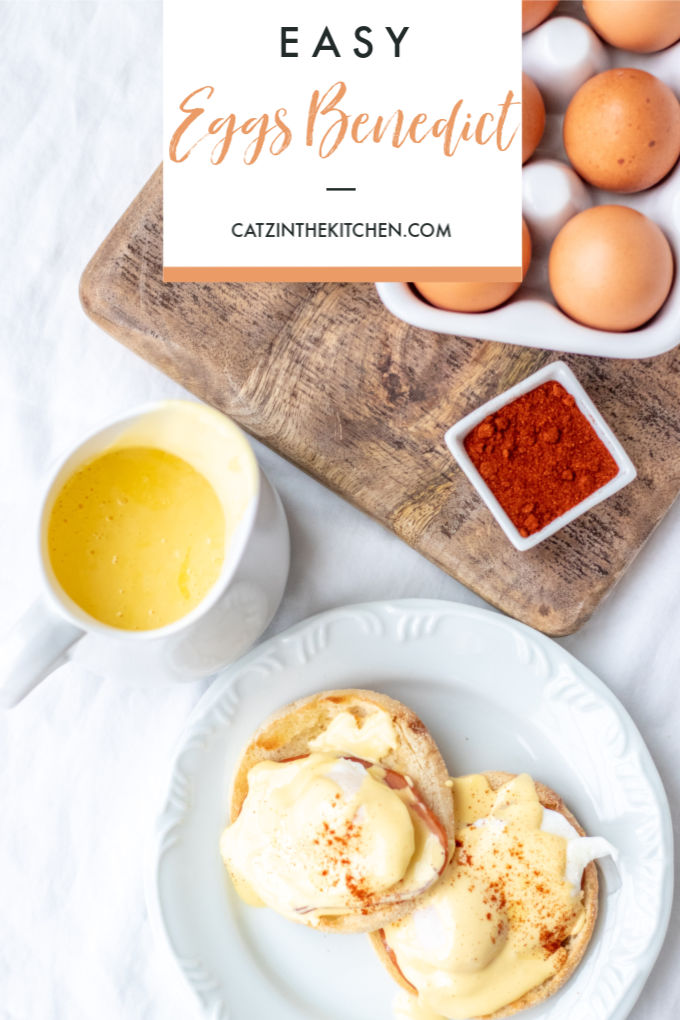 This post originally appeared on Catz back in January of 2014. In the six years since then, we’ve continued to make this recipe on a regular basis, and enjoy it! I’ve personally developed into a bit of an Eggs Benedict fanatic – can’t help but try any and all variants I see on menus at restaurants! This is a basic, simplified, approachable way to get tasty eggs benedict on your brunch table.

Eggs Benedict. It’s that meal that everyone likes to order at a breakfast establishment because it seems elegant and cultured, but with an ingredients list that is relatively simple, pronounceable, and short. Because it’s colorful. It comes in pairs. It’s cheerful. Its ingredients are named after countries (English muffins? Canadian bacon?). Basically, it’s a friendly, approachable meal that still seems European enough to be just slightly exotic to the American palate.

Also, it tastes amazing. Poached eggs (“cheese sauce,” to quote Julie & Julia) and hollandaise sauce? Yes, please. Julia Child describes “sauce hollandaise” the following way in Mastering the Art of French Cooking, Volume One: “It is probably the most famous of all sauces, and is often the most dreaded, as the egg yolks can curdle and the sauce can turn.” It can turn. Terrifying. I have no idea what that means. Luckily, the advent of the electric blender means that “sauce hollandaise” is no longer dreaded (though many still seem to find it intimidating) – in fact, it’s downright simple. 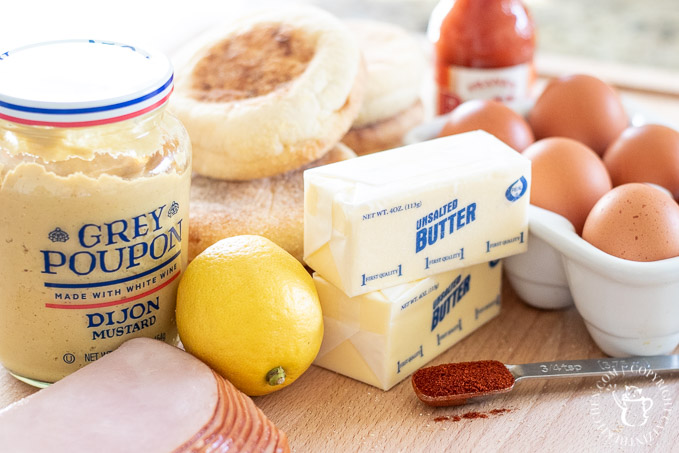 Two of our favorite blogs, Taste and Tell and The Pioneer Woman, both have easy blender hollandaise sauce posts, and while they’re each quite excellent, I actually prefer Deborah’s at Taste and Tell. The addition of a bit of Dijon mustard and a dash of hot sauce adds a delectable tang, and I’ve never had it turn out anything but mouthwateringly delicious

Now, the poached eggs on the other hand…well, hopefully you already know how to poach eggs. Excellent! Go forth and poach! And…if you don’t…well, don’t be afraid to try it. Ree Drummond (The Pioneer Woman) has a great tutorial on it, though I must admit, I don’t find the swirling of the water particularly helpful. Personally, I find it easiest to get a pot of boiling water as hot as possible, crack in an egg, and then use a slotted spoon to help keep it together while it cooks for a moment or two. This is incorrect, I realize. The water is to be barely simmering, the eggs are to be completely fresh, or, if such eggs are not available, a poaching pan is to be used. I get it. I understand. I will try to get a poacher and correct my ways. In the meantime, I make this work. I’ve had poached eggs in a purportedly authentic (American) French boulangerie, so I’d like to think I know what they’re supposed to taste like – these are basically there. They just take a bit of extra babysitting. And sometimes they’re mildly disastrous. But, hey, if you lose one…throw in another! 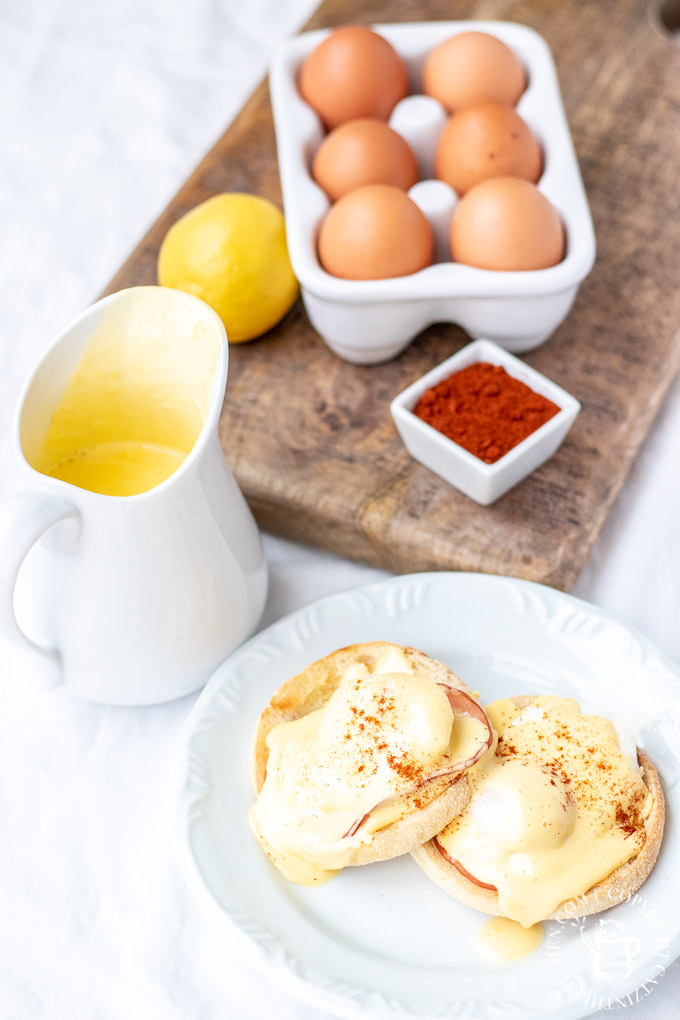 As an aside, you might wonder, as many do (do they, though?), where this delectable breakfast dish received its admittedly odd nomenclature. Honestly, to the best of my knowledge, there is no verifiable answer. There does exist, however, a letter claiming that in a 1942 issue of The New Yorker magazine, an interview with one Lemuel Benedict revealed the origin of this wonderful breakfast tradition. According to the letter writer, who claims to be a second cousin of Lemuel’s, Mr. Benedict concocted the dish while ordering off-menu (You knew that ordering off-menu and off the menu mean opposite things, right? Sort of like flammable and inflammable meaning the same thing?) at the legendary Waldorf Hotel one morning in 1894. According to Benedict lore, the chef at the Waldorf was impressed enough with the meal to add it to his highly regarded menu, thus giving birth to decades of indulgent brunches everywhere.

True story or not, Eggs Benedict is generally one of the best breakfast dishes you can make, in my humble opinion. It’s easy, relatively quick, inexpensive, and elegant. How many meals can you really say that about? So, what are you doing? Why are you still reading this? Go! Make hollandaise sauce! Poach eggs! Toast English muffins! Bask in the culinary marvel that is Eggs Benedict! 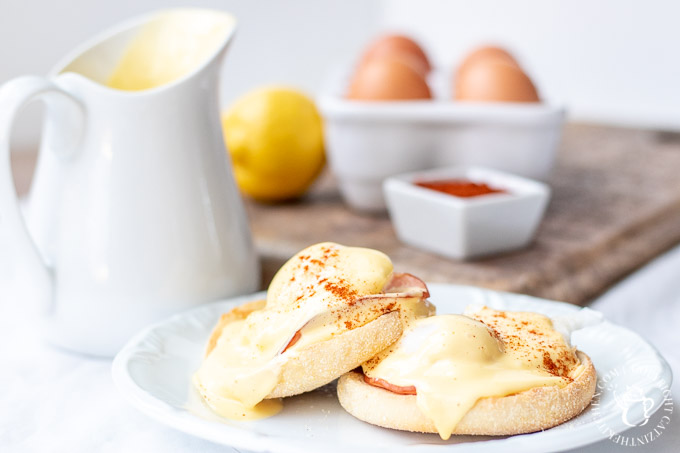 […] I’m sure she is for many of you (her Black Bean Nacho Burgers are amazing). I was making Eggs Benedict, and these potatoes seemed like the perfect side. Plus, though I dare not have hoped it, I sensed […]

Almond Waffles with Raspberry Basil Sauce - Catz in the Kitchen

[…] is why crepes, eggs benedict, or pancakes are usually the ways to my heart.  You would think I would just feel lucky enough to […]

Oh, I'm honored that you love my version of the hollandaise!! I don't have to tell you how much I love eggs benedict, and I'm thinking that this needs to be my Sunday breakfast!

It is so good! And so easy! Our five year old requested it again the following morning. :)