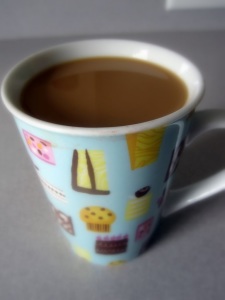 I have a confession…I’m somewhat of a pampered woman…well…maybe to be a bit more honest…I am quite spoiled by my husband. It’s true…I am. But I think even before I married Josh, I was pampered in one way or another. My mom spoiled me a bit too. Just a bit though ;) But here is another confession…the coffeemaker…stumps me! Yes, there it is…I am constantly being outsmarted by our stupid and expensive coffeemaker.

I have to have coffee every morning…but it’s on my terms of when I am ready for it. And Josh has always been the one to make it for me. If not him, then it’s Starbucks or Peets Coffee or back in the day, my mom. I knew that you had to put water in the thing…and press buttons but since I’m being honest…I’ve always been to lazy to really learn. Okay, there I said it…I’m lazy! *phew* I feel so much better getting that off of my chest, haha. When I was pregnant with Eden…especially the first few months, I was tired…so Josh bought me one of those cup warmers that just plugs into the wall. And every morning before he left for work…he would make my coffee the way I liked it and leave it on my cup warmer so it would be right there when I woke up-he is so sweet isn’t he? After months of using it, it kind of gave out and the warmer thing wasn’t making my coffee warm. So I had to start zapping it. And it’s been this way up until the last few months.

Although I love coffee dearly…I also love to drink sweet coffee and I cannot drink Josh’s bold strong flavors. It’s just not what I grew up on and it’s to strong for me…meaning I have to put several teaspoons of Sugar in the coffee to sugar it up enough. So, Josh has been buying me my own special flavored coffee. I get to pick the flavors and it’s so fun. And I don’t even mind the crazy looks I get from people as they pass me in the coffee aisle and they see me with my nose in grinder sniffing the different scents, it is kind of funny if you see me do it.  Anyways, every morning, Josh will make his coffee and then proceed to clean the coffee maker out again just so he can make me my special coffee. I had been using Beans…up until this week. We had to buy the pre ground stuff because it was on sale and when I woke up early in the morning, I wandered into the kitchen to press the on button on the coffee maker and there was a weird sound I was not using to hearing. And I couldn’t understand why it wasn’t working. So I called up Josh in a panic and ( I didn’t yell) I frantically demanded why I didn’t have coffee in the coffeemaker. Josh of course started laughing at me which made me more frustrated and he explained about the different lights and buttons on the coffee maker and that I needed to press the on button once…when I told him I did that and it made a weird noise he explained that I must of hit it twice in my frustration. So I hit the button once and nothing happened…no noise no nothing. Again he laughed, and said, “give it a moment.” So I did…and low and behold if I had been more patient I would of seen that coffee really was brewing.  The next morning…I forgot what to do…hahaha, yes I know, I get confused easily I’m really a blonde on the inside. So I had to call him again and he said the on button…press it….oh yeah, I remember now, Heehee.  So yesterday morning…I knew that I had it all figured out now and there was no way I was going to call Josh and bug him. I simply press the on button and wait patiently (not my strong suit).  The coffeemaker started making it’s coffee making noises and when it beeped (informing me it was ready) I walked into the kitchen, oh so proudly. I take the carafe out of the coffeemaker…and it’s Hot Water only!? I start to panic for a moment….I did everything right. I pushed the button and waited patiently. Josh must of screwed up, finally! Hahaha, yes I was rejoicing slightly that it wasn’t me that did something incorrect. So I called him up and I said…so I made my coffee this morning and imagine my surprise when I went to pour it and there was only hot water in the carafe….and he started laughing again and he said,” Your Right! I did everything else this morning except put the grounds in the coffeemaker.” So after explaining to me what to do and where to fill the water up and where to put the beans…I had coffee brewing 10 minutes later.

It’s a funny story…it just goes to show what an idiot I am most of the time and what I do to constantly embarrass myself even when no one is even around me.