Monday was Josh’s Birthday and I wanted to make him a special dinner. Having your birthday on a Monday kind of sucks. It’s the beginning of the week and your tired and there is still a long week ahead of you. But I wanted him to have a special evening at home with his ladies.

When I was scanning our grocery stores ad, I saw that Salmon was on sale. We don’t get to eat a lot of salmon in our house because normally it’s expensive and it doesn’t play well with our budget. But they had salmon on sale for $5.99 lb and I thought…maybe, just maybe…that was something I could make work into our budget.

I called my mom to ask her about what kind of salmon it was and her thoughts. The salmon was a Wild Alaska Yukon River Kepa Salmon and she said, it’s on the lower totem pole as far as Salmon goes, but that they’ve ate it many times and it’s good. My thoughts were, I don’t care where on the totem pole it is, if I can afford it, Salmon is Salmon and Josh and I love it and I wanted to get it for him. So I went to the store and got my groceries and Salmon and came home.

The menu  I had planned out was the Garlic Salmon, with baked sweet potatoes, a fruit salad, and seasoned corn. All delicious and healthy, but simple too.

The first thing I did was take a baking sheet and place some aluminum foil on top of it and sprayed it with cooking spray. Then I rinsed off my fish and patted it dry and laid it on top of the greased foil. Then I set my oven for 450 degrees.

Then I started mincing my garlic. Fresh garlic is one of my favorite herbs to cook with. I love the smell, and the taste and I love how my hands smell afterwards. When I was a kid, I would always beg my mom for her empty garlic powder container so I could play with it and take the cap off and take a whiff…it is probably one of my favorite cooking smells.

Then I took some sprigs of fresh organic baby dill and chopped that up nice and fine. And then I strayed from the recipe a bit. I took some butter ( Mmm, butter) and softened it just a bit in the microwave. Then I mixed in the garlic, dill, some salt and pepper, and lemon juice and mixed it together to make a delicious garlicky buttery paste.  I sprinkled my fish with Salt and Pepper and began lathering my fish in a sweet buttery spread. Then I sliced some lemons and placed the sliced lemons on top of the salmon along with a sprig of dill on top of each lemon. It looks like a masterpiece even then…and it wasn’t even cooked yet. 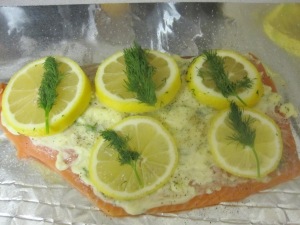 When the fish was complete, I took another long stretch of aluminum foil, greased that and covered the fish and made a fishy tent. 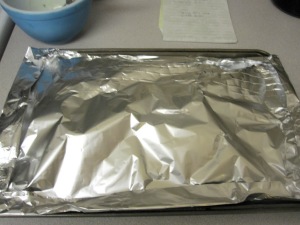 Another great thing about fish, other than it’s relatively a easy thing to prep, is that it cooks pretty fast. I stuck it in the oven for 20-25 minutes and I let Josh open his Birthday gift from me and the girls :) 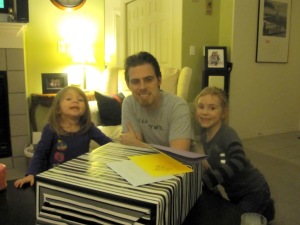 What could it be?! 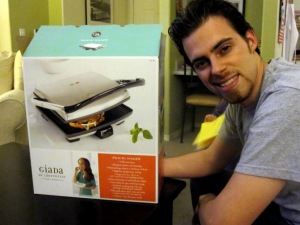 Ta-da, it’s a Panini Maker!!!
By the time, Josh had read all of his cards, opened his gift and examined it and thanked me a million times, dinner was ready.

The Salmon ended up being a perfect doneness at about 23 minutes. But it smelled and looked so good sitting there in it’s little buttery bath :) 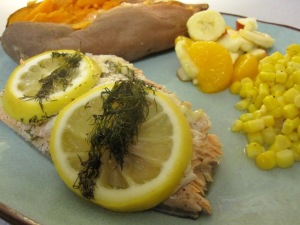 The fish tasted awesome and we had a wonderful birthday dinner for Josh. I couldn’t of been more pleased about my lower totem pole Salmon. It did the job just fine and I felt so healthy afterwards too…which is why, I ate a birthday cupcake that Josh brought home with him because his staff made cupcakes for him, so sweet :)
Garlic Salmon
Source: Allrecipes.com
Adapted by Me
1 1/2 pounds salmon fillet
salt and pepper to taste
3 cloves garlic, minced
1 sprig fresh dill, chopped
5 slices lemon
5 sprigs fresh dill weed
1/4 cup butter, softened- to make a paste
Pre-heat oven to 450 degrees.
Spray two large pieces of aluminum foil with cooking spray.
Place salmon fillet on top of one piece of foil. Sprinkle the salmon fillet with salt and pepper.
In a small bowl make a paste with the butter and add the minced garlic and chopped dill and combine.  Spread the buttery paste over the salmon. Top with lemon slices and sprigs of dill.
Cover Salmon with other sheet of foil and pinch tight to make a tent. Place on a large baking sheet. Bake in pre-heated oven for 20-25 minutes or until fish flakes easily.

Thanks Chaya, I love doing the link-ups, they are so much fun and I love meeting other foodies through it :)

I wrote you a whole not on how much I like this recipe and my computer froze and it disappeared. I also want to thank you for linking many of your delicious recipes. I look forward to them, each week.

Wow! This is such a healthy dish - I love it!Courtney

LOL before I read further I was thinking - Ohh I LOVE garlic - and then I saw that you were thinking the same thing :D I love lemon too so I just may have to steal this one :D Looks very yummy!