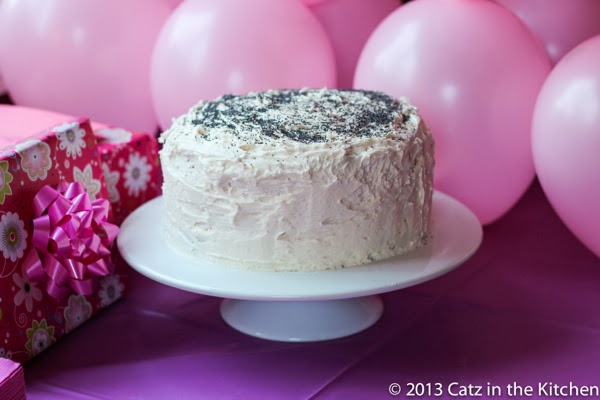 As you already know if you read our weekly musings here at Catz, we celebrated my beautiful bride’s thirtieth birthday this week. And, since you only turn thirty once, I decided to make her the cake of her choice (okay, that’s not the only thing I did, but it was part of the celebration plan)! Being the cake connoisseur she is, my Chelsia picked out no fewer than four cakes she would like, and gave me the option of choosing one or making all four. I took the latter as being a bit facetious, and chose what the one she obviously wanted most and had chosen first – Bake at 350’s Spiced Poppy Seed Cake with Almond Buttercream Frosting. In fact, I’m relatively certain she chose the others simply because she thought this one was a bit beyond my culinary reach, which is fair. Three layers, almond, vanilla, poppy seeds, folding of batters, cream of tartar – it’s an ambitious cake for someone who doesn’t prepare baked goods on an ongoing basis. 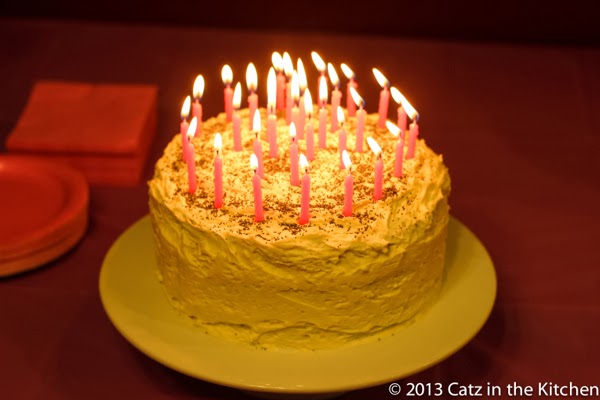 I’m very comfortable in the kitchen, and especially in front of the grill, but I generally don’t bake. Sure, I make pie crusts from scratch for my quiches, but outside of that, baked penne is generally the extent of my relationship with that lower part of the stove known as “the oven.” And the KitchenAid stand mixer? I get confused every time I try to use it. Turns out, it’s incredibly simple, but to me it seems like it ought to be more complex, so I end up overcomplicating whatever it is I’m trying to do. But, my lovely wife loves cake, and I was bound and determined to give her what she wanted this year. Oh, also, I had her around as a safety net… (Honey, why is the KitchenAid smoking?) 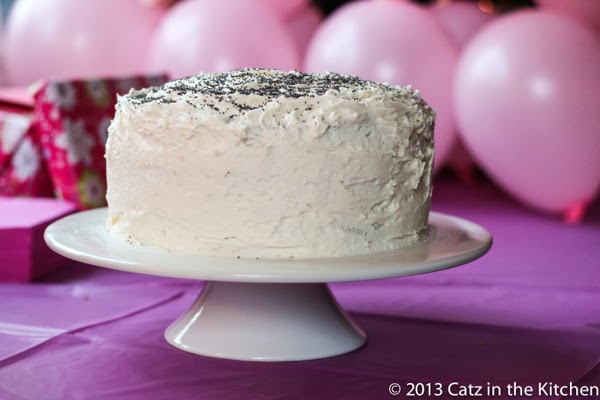 In the end, it turned out, and, I must say, is a truly spectacular cake recipe (I say this as someone who is not a cake person). It’s rich, creamy, moist, and dense enough that you don’t need to eat three pieces (benefit: one cake fed twenty-two people!). Caveat: don’t make this cake unless you like almond. If you don’t like almond…well, it’s an almond cake with an almond frosting, so, why are you still reading this post? Go make some Caramel Apple Spice Poke Cake instead! I made some minor adjustments (primarily to up the almond ante – that’s a thing, right?), notably one to compensate for my unwillingness to drop $16 on a small jar of cardamom. If you find yourself similarly resistant, you’ll appreciate that particular modification. Get baking! It’s not as scary as you might think – I speak from experience! 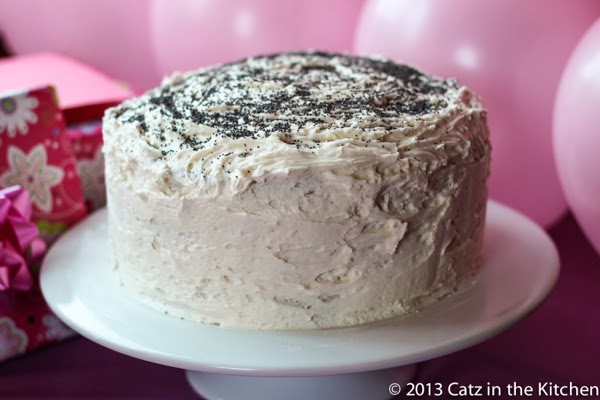 Recipe by Bake at 350 (slightly modified)

Love almond poppy seed muffins? Love buttercream frosting? Wish you could eat them in cake form? Need to feed a crowd? Stop whatever you’re doing and make this recipe!

Total time: about an hour

Oh my gosh. This looks so good. Happy birthday Chels!