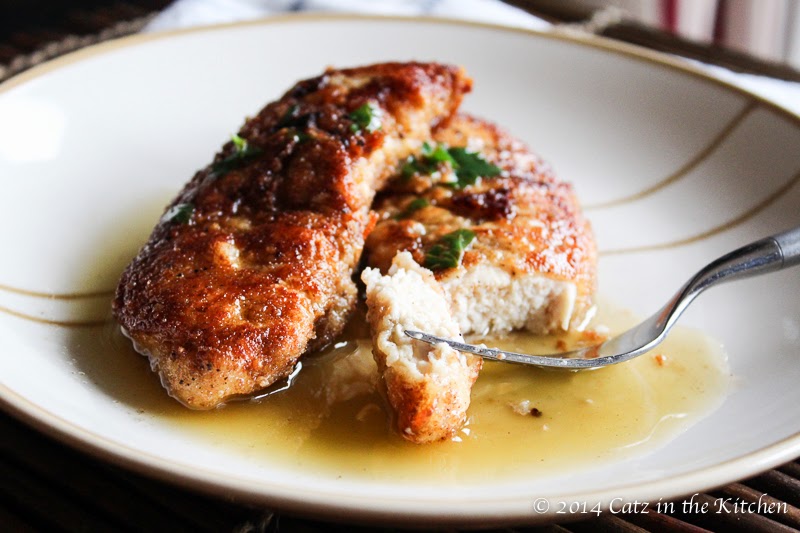 I had almost forgotten about my Julia Child monthly challenge when Sunday rolled around and I was making my grocery list for the week. With all of the kids various illnesses and things we had going on, I had kind of forgotten to plan ahead! I remember back in February thinking I wanted to make a dessert…but I think I’m going to leave the dessert for the April post since Easter isn’t to far away.

The original name for this dish is Supremes de Volaille a la Milanaise…which translates to: Chicken Breasts rolled in Parmesan and Fresh Bread Crumbs. Either way, both titles are very long. So I shortened it to Parmesan Chicken which I think is perfectly acceptable.

For those of you paying close attention, you’ll notice the above picture are not chicken breasts, but chicken tenderloins instead. Well…so I have a gas stove and I love it. But we buy our chicken breasts from Cosco and for anyone that buys their chicken there knows that their breasts are huge and it is a lot of work to get that thing cooked all the way through without burning it. Well…as you guess it, I burned the top of my breasts. 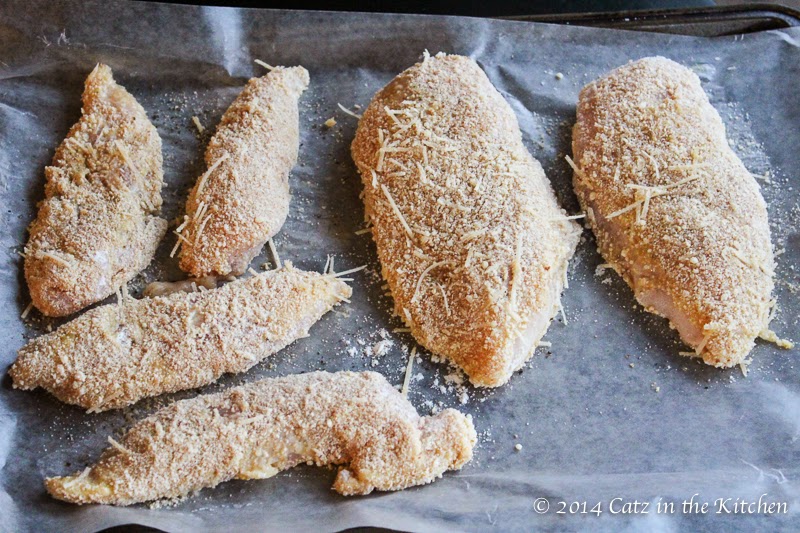 But lucky for me, I had thawed out some chicken tenderloin as well because the breasts are to big for our kids to eat. So I ended up using that for the picture. You could say that I’m swaying from the original recipe a bit, but really, who cares! The flavors are there and that’s the main thing right? I don’t think Julia Child would strike me on the hand for adapting the recipe a tad. 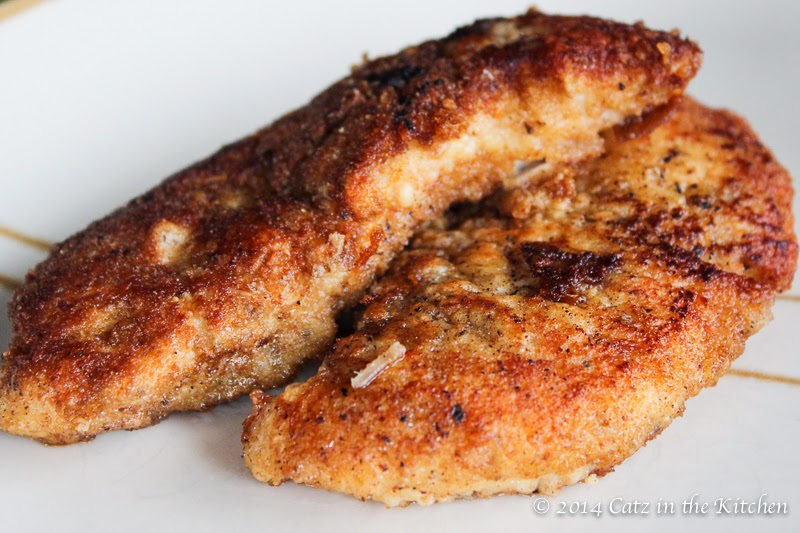 Funny that I mention adapting the recipe a tad…I did adapt it just a smidge so that I wouldn’t burn these tenders too. What I found worked really well in the case of the breasts and the tenders was actually a lot simpler and easier to clean up. I sautéed the chicken in butter to get that great caramelization on the chicken and then once the crust was perfectly golden, I through it in the oven to finish baking the rest of the way through!

Because I’m on Spring Break with the kids right now, my goal has been to get a lot more cooking and baking done than I would usually do during the week, so I made these in the afternoon and once they cooled stored them in the fridge until we were ready to eat. I was scared that they would dry up…but I put them all back in the oven in a baking dish at 350 for 20 minutes and they were perfect! Julia says in the recipe that you can make these ahead and just reheat them…but I didn’t buy it, because chicken dries up so easily. This was not the case, they heated up perfectly and the chicken was devoured, by all three of my kids…including Christian!

Because this dish is rather easy…now that I’ve adapted it for my kitchen and the chicken I keep on hand, I would make this a lot more often. It is actually really easy to make and it is so good. And the brown butter sauce is the perfect sauce to accompany the chicken with. 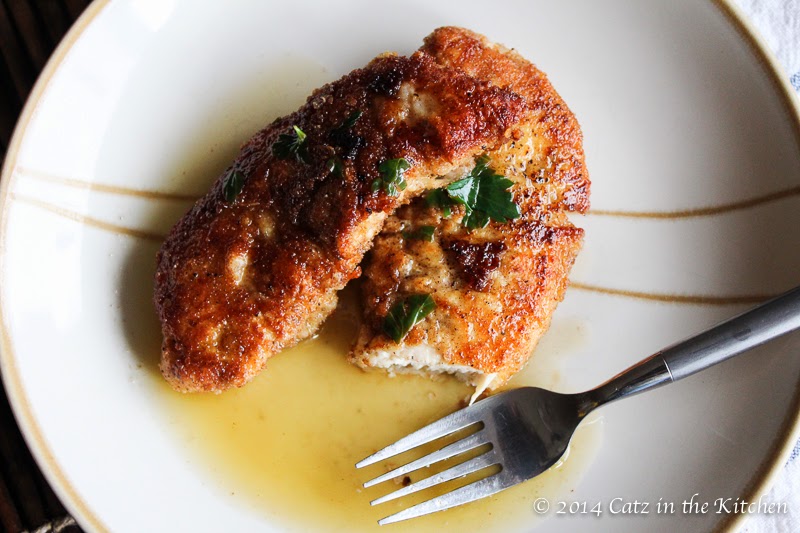 French cooking at its easiest! This chicken has a beautiful crispy parmesan layer and is finished by baking in the oven and topped with a drizzle of brown butter. 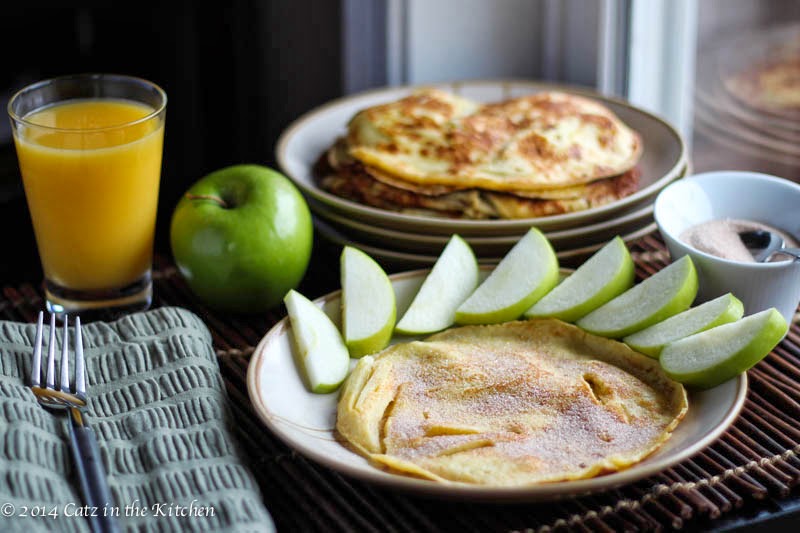 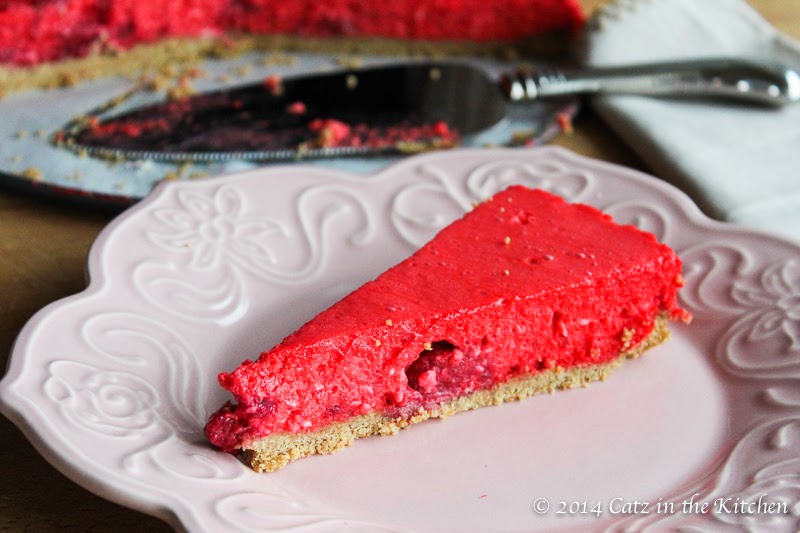 For the sauce, do you just melt it together in a saucepan or does it have to simmer a bit?

I think I will make this tonight!

Hi Sandra! I made the brown butter sauce in a separate saucepan. It does not have to simmer. Brown butter comes together in a snap. If you've never browned butter before, this post might be helpful to you. Have a great day and let me know what you think. :) https://catzinthekitchen.com/2013/12/how-to-brown-butter.html

I really need to venture into making some of Julia Child's recipes. This looks fantastic, and like something my whole family would love!

I was surprised at how much Christian liked his. This one is definitely worth making!

Love the recipe! Could this be cooked in a dutch oven?

You know, I'm sure you could. It would definitely be worth a try, but I would just keep an eye on it so it doesn't burned or dry out. But if that were the case, just pour a little bit more of that brown butter sauce on it and I'm sure it would be great. ;)