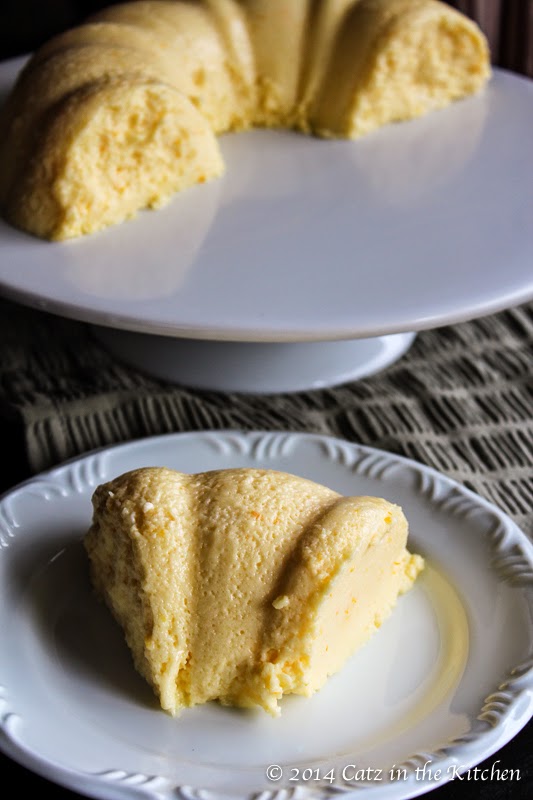 I did it again. The end of the month snuck up on me and I hadn’t gone any farther in my Julia Child resolution other than picking out the recipe for April and buying the ingredients. Which would assume that I would remember to make the recipe right? Wrong!

I think with Christian coming out of being sick and me preparing for our trip (T-Minus 2 days) that I am just scatterbrain city! I even keep telling myself that I need to sit down and write out a “To Do” list of things to remember to pack and I haven’t even done that yet. *sigh* 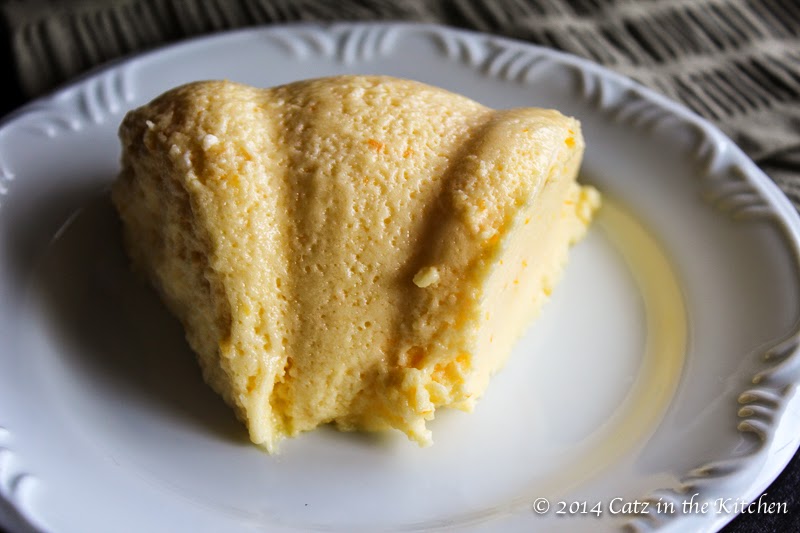 Today is going to consist of cleaning the house and doing laundry. I might even begin packing the kids bags, but we shall see how much I get done today. I’m a firm believer in cleaning before leaving on a trip. It just makes things so much nicer when you come back home and all you have to do is unpack. 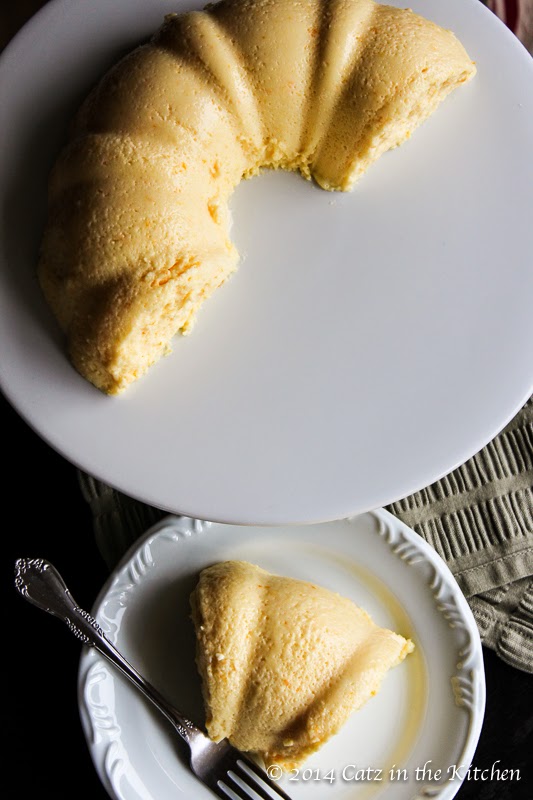 So let’s talk about this recipe! Like I said at the beginning, I knew what I was going to make for this month a few weeks ago and I had bought everything I needed. It was just sitting there waiting for me to use it. And I’m glad I finally got around to making this because it is EXCELLENT! Seriously, this is one fabulous dessert. I had intended on making the Raspberry Bavarian Cream like Julie Powell made in the movie. But, I just didn’t feel like straining seeds from raspberries, lol! Yes, sometimes, I am that lazy. This version of Julia’s Bavarian Creams is the original version and the others in her cookbook are just variations of what you could do to change the flavors up. 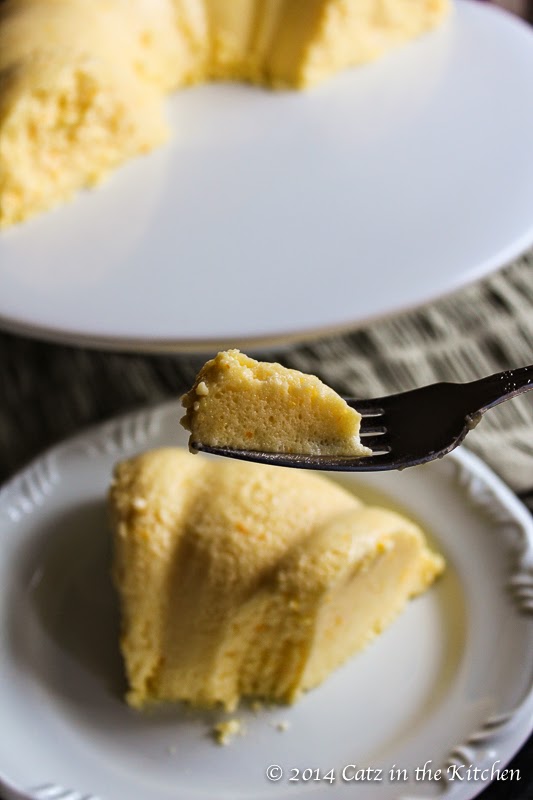 This dessert is pretty simple to follow, but it involves a lot of steps and you want to make sure you read it all the way through, at least a few times so you understand it. This orange bavarian cream tastes like a cream sickle. You guys know what those are right? Ice cream bars that are a mixture of vanilla cream and orange. Or from way back in the day, Henry Weinhard’s Orange Cream soda. (I used to buy those all the time as a kid).

The trickiest part of this recipe is if you choose to mold it (like I did), removing the cream from the mold can be challenging. I stuck the pan ( I used a bundt pan) in hot water for just a couple of seconds and then I took a really small knife and carefully loosened the cream around the edges of the mold, placed my cake stand on top of the mold and then flipped it. I did this THREE times and nothing happened. So I just kept loosening it up around the edges. The last time I attempted to flip it, I had Grace telling me whether it was coming loose or not. Word was, it wasn’t. But then I went to flip it back over again to try and loosen the side when it was to late, it was coming un-molded and half of the mixture fell on top of the other half. Grr! Grace felt so bad, but I assured her it wasn’t her fault. So…if you are wondering why I only have pictured HALF a mold…this is why. So if you mold it, be patient! Or you could make a few pies with this cream. OH MY WORD-THAT WOULD BE HEAVEN!

The kids and I loved this dessert and I would totally make it again. Josh has yet to try it because he honestly can’t eat things that taste like this. Long story, it just makes him sick from a time when he was a kid and had surgery. So I’m pushing for him to have a nibble…but I don’t expect him too. So I think I’ll be attempting the Raspberry Bavarian Cream soon. 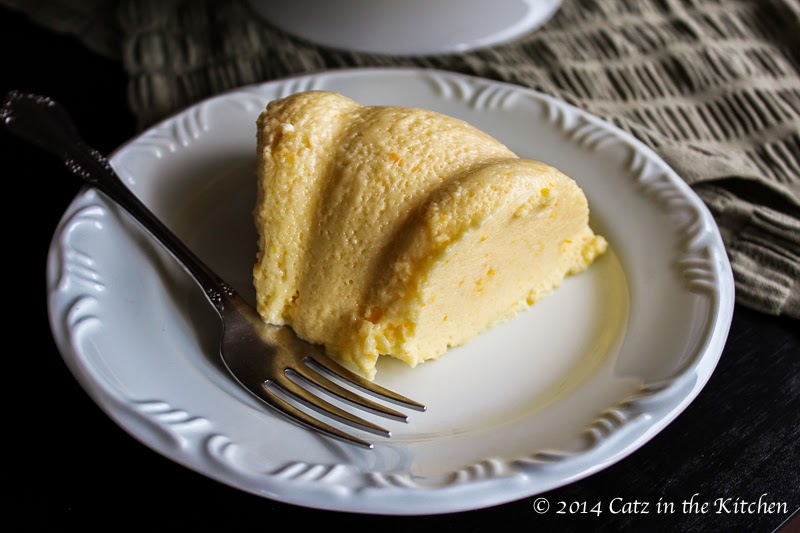 This beautiful cold molded dessert tastes just like a cream sickle! It’s creamy, flavorful, and light and worth every single step it takes to make it!

Hi Jesse, yes, that would be simpler. But then you forfeit those beautiful ruffled sides that you get from a bundt pan. I'm thinking I might try a silicon mold the next time I attempt this. :)

My Mom was a self taught chef, yes chef due to the sophistication of the dishes she made. Julia Child was in high vogue back in the 1860's and the orange bavarian was one of the dishes she made often. Try making it in a 10" springform pan lined with ladyfingers and serve with a raspberry sauce. This was her rift on this dessert. Pretty,and not necessary to unmold at the last minute. You can decorate with whipped cream rosettes with a fresh raspberry in the center.

[…] Orange Bavarian Cream Cake by Catz in the Kitchen […]

i've never had bavarian cream but it looks great!

It's such a unique and delicious texture. I can't wait to try it with raspberries.

This sounds and looks amazing!

Thanks :) It's kind of a tasty little treat!