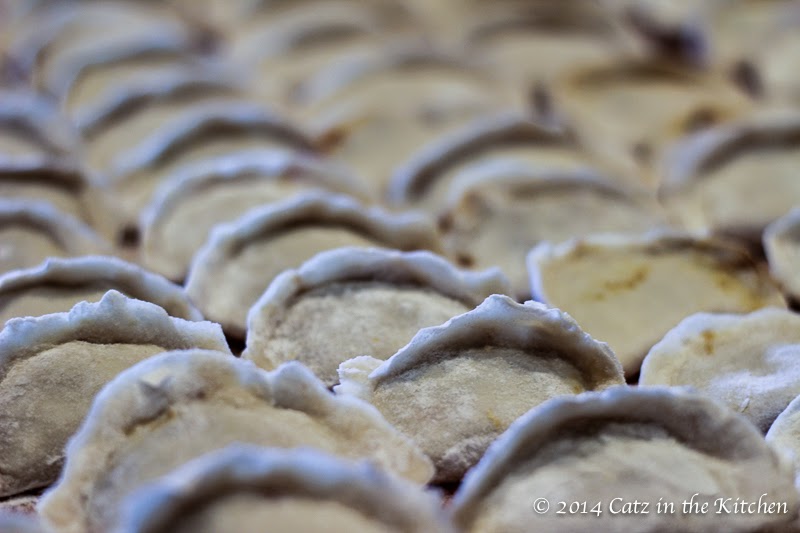 My dad and step-mom came to visit us in June, we were all excited. Of course it was great to see them again. It had been two years since they had been here and I was pregnant with Christian at the time. Obviously, they had never met Christian before. But, my step-mom Jen is from China and we were all stoked about her chinese dumplings…or as some people prefer to call them potstickers.

For the record, this is not a recipe post-however I did find a dumpling recipe through one of my sister’s pinterest boards yesterday that looks very similar to these dumplings. And easier for you, because you buy the potsticker sheets from the store. I’ll post the link for the recipe at the end of the post. It’s next to impossible for me to even get a recipe down for this stuff because when she visits, she makes hundreds. I think she made over 300 dumplings when she made them and it literally took all day. 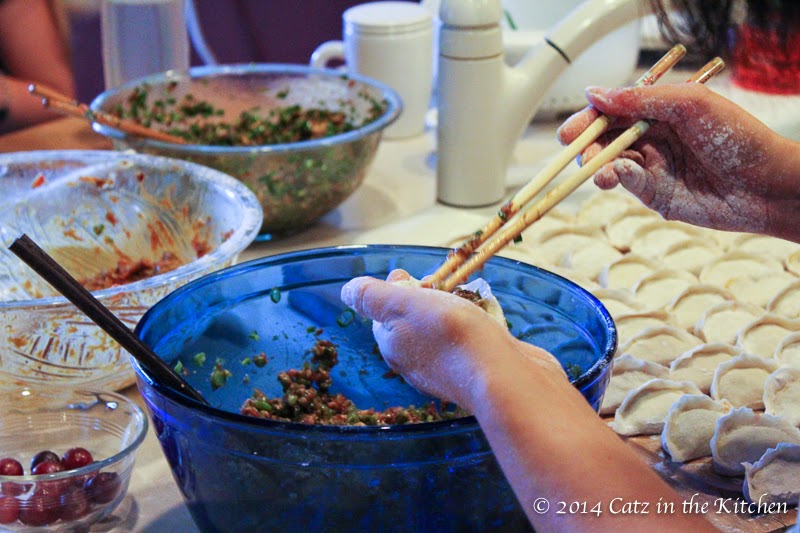 As in, as soon we were done eating breakfast, she got in the kitchen and started working on the dough for the dumplings, which is just flour and water mixed together to create the type of dough used for different methods of cooking. If memory serves me correct, a thicker dough is for boiling and the thinner is for frying or baking. (But don’t quote me.) As you can see in the above pictures, there were 3 bowls full of mixture going: Beef and carrot, pork and green beans, and pork and green onion. And let me tell you…so much flavor was packed into each dumpling and each filling tastes different. It is seriously the best tasting Chinese food I’ve ever had. 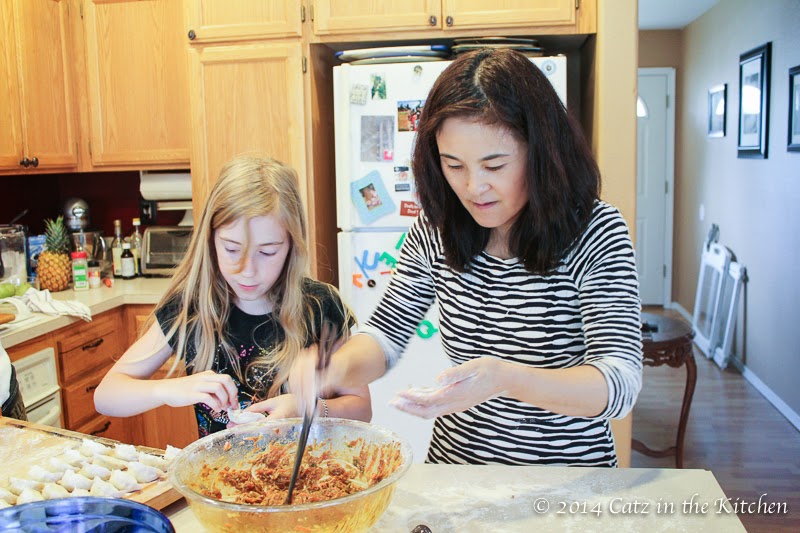 Grace worked steadily beside Jen all day, helping fill the dumplings and then gently folding them over. Let me tell you, it is harder than it looks to get it perfect. 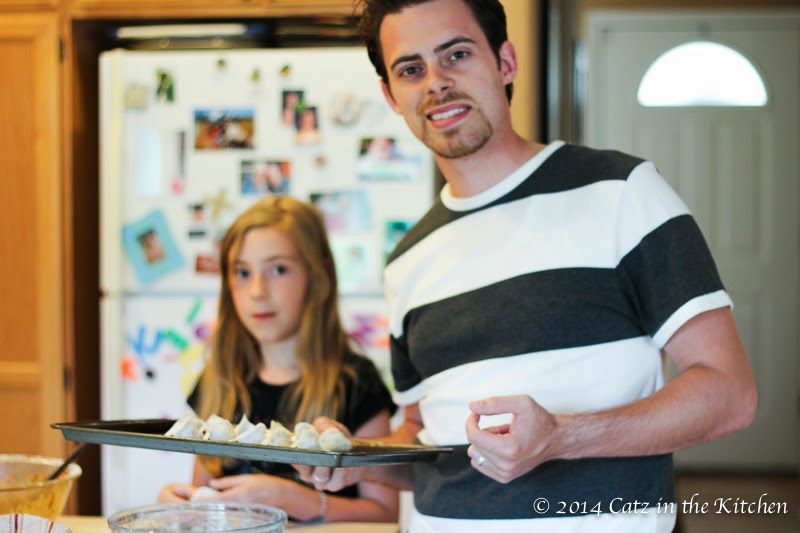 With the help of Josh, our freezer was full of dumplings that he helped flash freeze so we could put them in our outside freezer in gallon sized freezer bags. I think I’ve got like 3-4 bags of dumplings with different fillings in my freezer now for easy, quick meals. 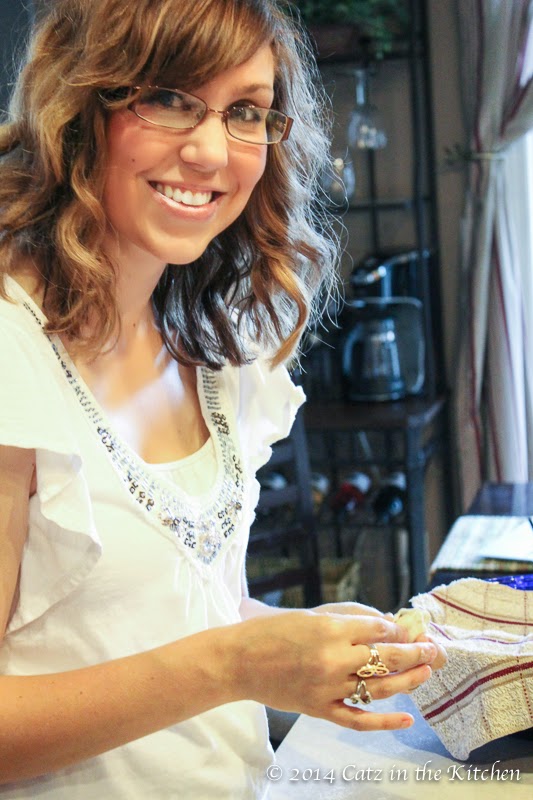 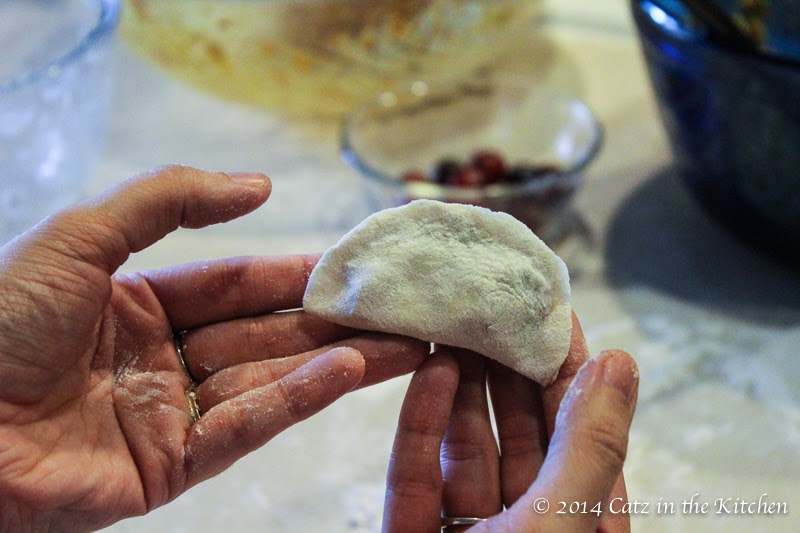 My dumplings never looked quite right. They always kind of ended up looking like a soft taco that got squeezed together. And I tried a bunch of times. Jen said she has been making dumplings with her family since she was 10 years old. She’s had a lot more practice! She was very encouraging about mine though. Haha! 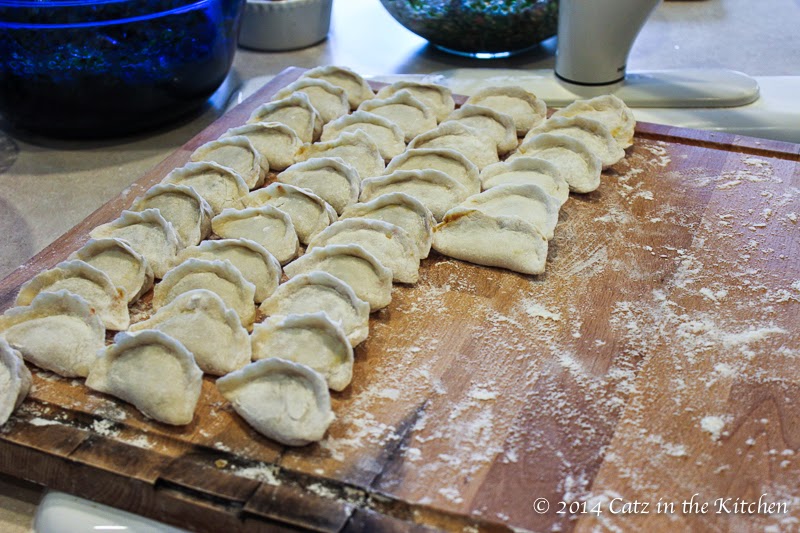 You can kind of tell which ones Grace and I did and which ones Jen made. LOL! See that last one on the end? That’s one of Grace’s dumplings. 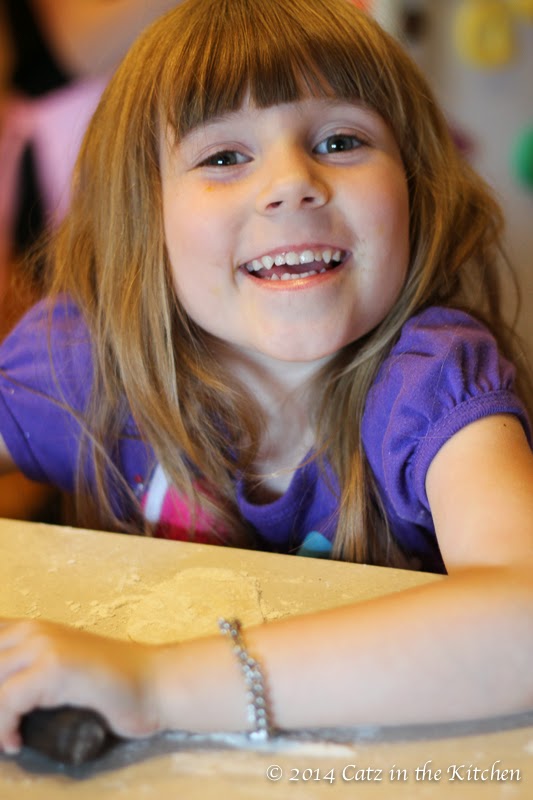 What did Eden do you might ask? She helped roll the dumplings out with a special rolling pin from China and helped make a flour mess on my kitchen floor. But she had so much fun getting her hands involved too. 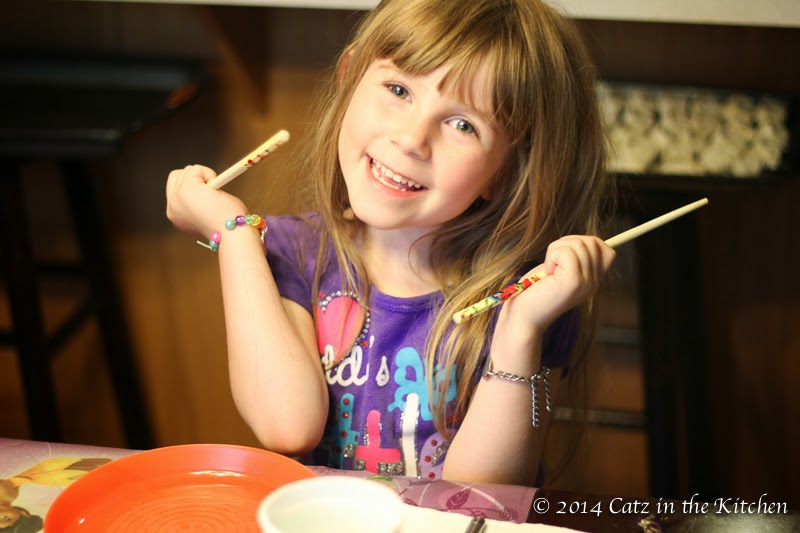 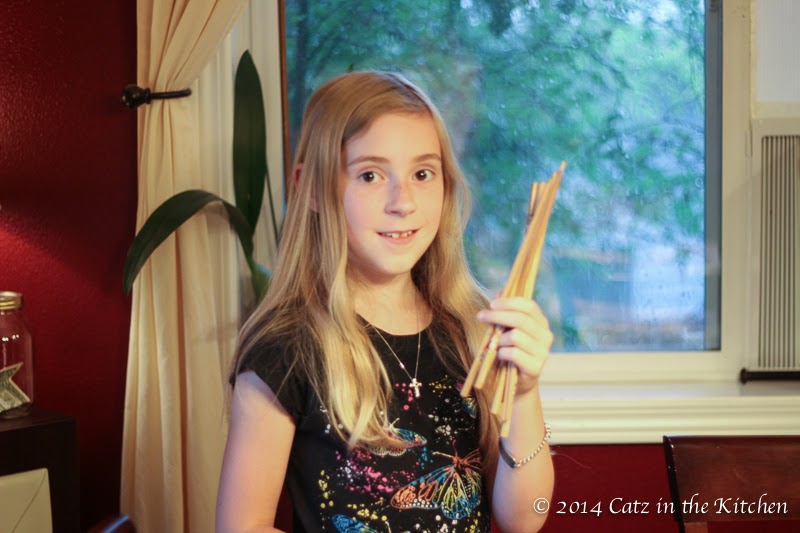 When dinner was almost ready, the girls set the table and yes, we all attempted to eat with Chopsticks. We were all kind of terrible at it. Except for Jen. Ya know, because she’s Chinese. 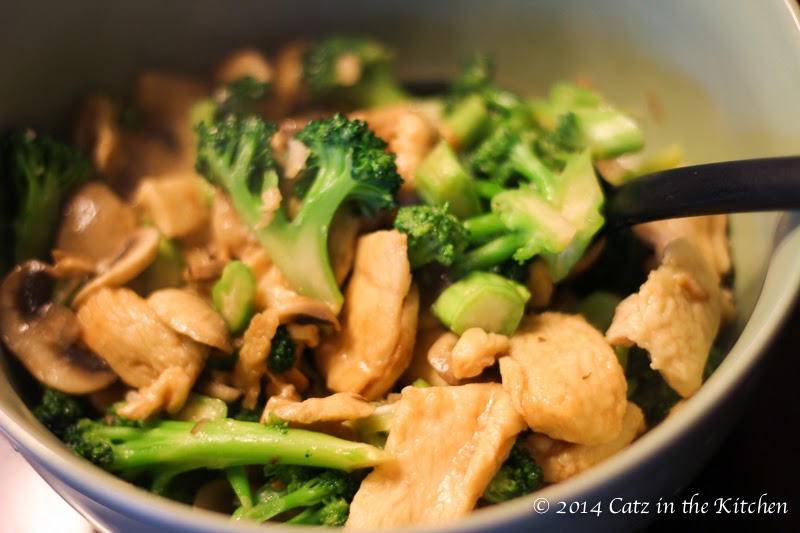 Aside from some white rice which we had on the side with the dumplings-which was made in the RICE COOKER my dad and Jen got Josh and I as an early anniversary gift. Finally-I can stop killing the rice! Jen also made this delicious chicken, mushroom, broccoli dish that she made the last time she was here. This was the dish that made Eden fall in love with mushrooms! 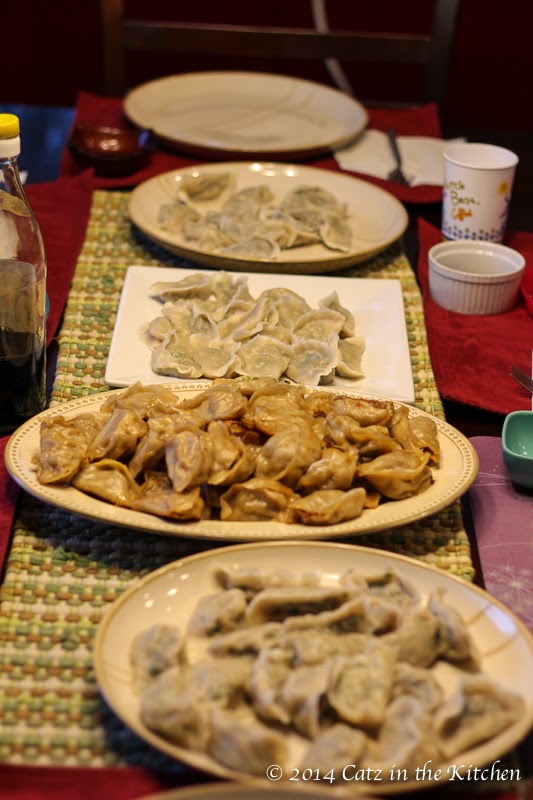 And here was the final spread (chicken & mushroom dish and rice not pictured) of dumplings. Needless to say, they did not all get eaten. We experimented with baking some and grilling the dumplings to and they were all really delicious. We enjoyed these dumplings as other meals throughout the week.

A couple of things I learned while Jen was here. We have a huge asian market about 20 minutes from our house. The produce is cheaper and better looking than in our grocery stores. Asian sauces like chili sauce, soy sauce, etc also are much cheaper there.

So…if you like dumplings, aka pot stickers then here is a recipe that looks very similar to the ones Jen made for us and easier too. This recipe should not take all day :)

These look amazing! What a fun experience for the girls! I definitely want to start making more Chinese food at home.

YES! Me too! Jenn, if you haven't looked at it on Amazon, Steamy Kitchen has a few cookbooks that is all asian food. I want to look at it the next time I'm at a bookstore.

This looks like so much fun Chels!! Now I'm hungry!

It was a lot of fun! I look learning how to make new foods...especially ones that are authentic.