Skip to Content
376 shares
Jump to Recipe
These grilled pork chops with blackberry sauce are a delightful whirlwind tour of your palate’s capabilities and a must-grill this season! 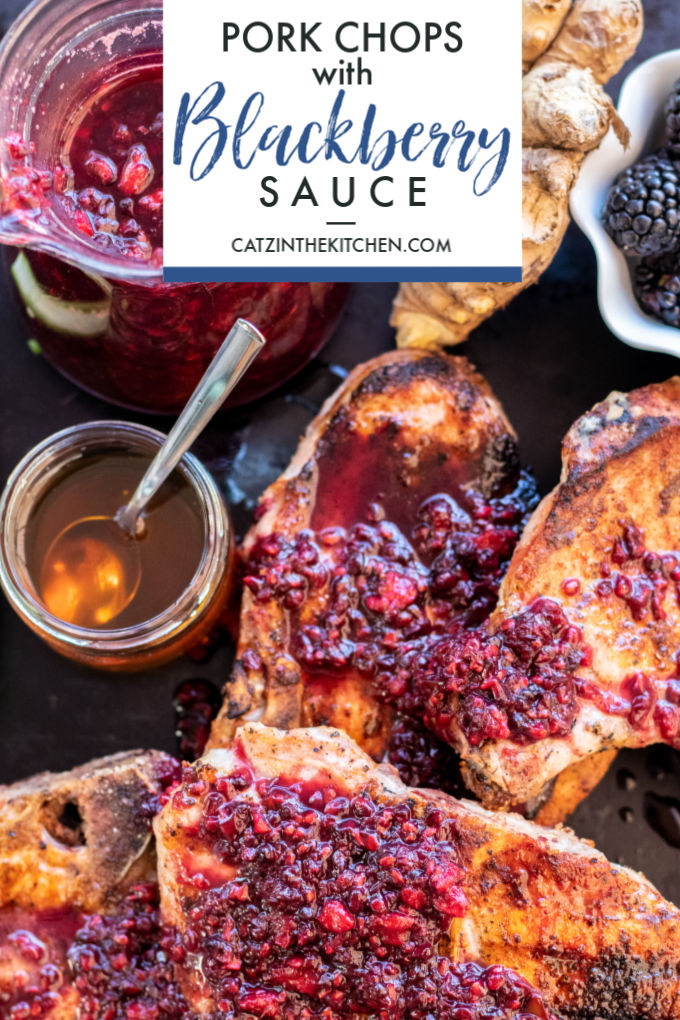 This post originally appeared on Catz in June of 2013. It’s quite delightful, and we realized, seven years later, that the recipe card and photos were outdated and in need of some attention! We’ve remade, reshot, and updated the recipe – we hope if you haven’t tried it yet, you will! If you’re here in the Pacific Northwest, berry season is coming up quickly, so get your grills, blenders, and freezers ready!

Chels came across this totally delicious looking recipe from Season with Spice on Pinterest. I can see why it caught her eye. Blackberries are always beautiful, of course, and up here in the Northwest, they are also ever-present. Seriously. We fight to keep them out of our yards. We had to use machetes and a chainsaw at my dad’s house the other day to reclaim a patch of land long surrendered to the constant forward march of the blackberries. But, even though they are a headache, come late summer, we remember why we love them. Everywhere you go, alongside roads, in parks, and, yes, even your own backyard, this aggressive foliage offers up its definitively redeeming quality – fresh blackberries.

Suffice to say, when “blackberry season” comes around, we snack on them, make pies (and even empanadas) with them, make cobblers with them, put them on ice cream, add them to our smoothies, crêpes, and salads, put them on cereal, and just generally try to enjoy them enough to remind us why we don’t burn them all with fire when they’re choking the life out of our gardens. One last thing we do is freeze them. A small bag of frozen blackberries at the grocery store out of season will run you a good three to four dollars. An enormous bag that you picked yourself and stocked away in the freezer last August? Why, that would be quite free of charge. This year, our freezer is still stocked with the marvelous little berries thanks to the picking efforts of Chels and Gracie last summer. Blackberry smoothies? Check. 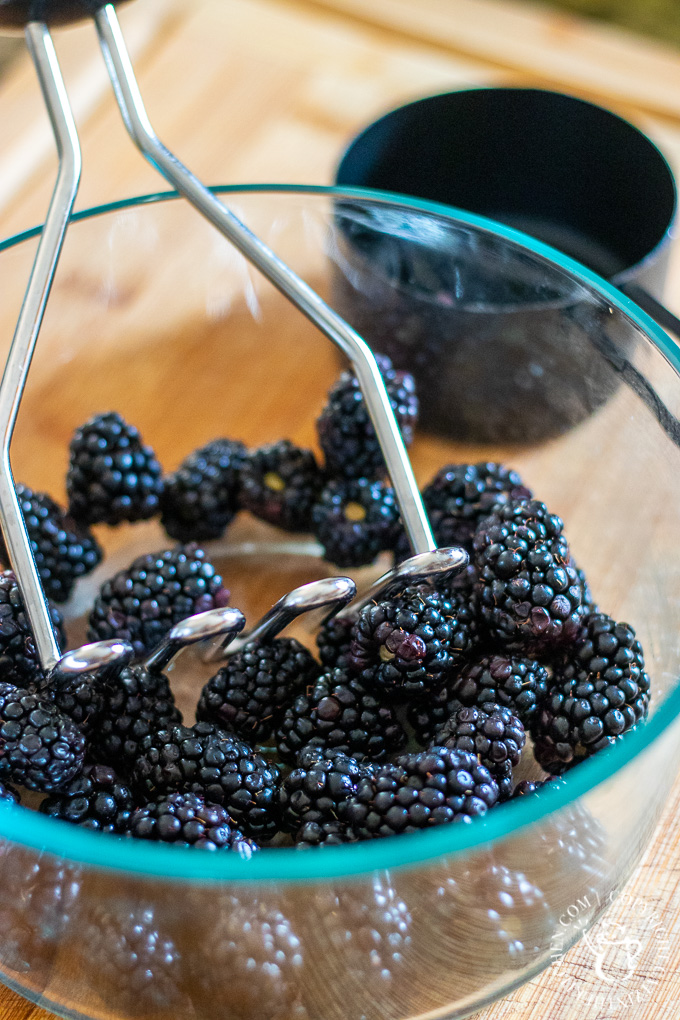 Back to the recipe, though. Again, it’s an eye-catching one because of the vibrant colors of the blackberry sauce dripping off the side of the pork chop. It’s also incredibly tasty, however. Look at this ingredient list for the sauce: blackberries, honey, ginger, chiles, salt, pepper, lemon juice, and balsamic vinegar! If your mouth isn’t watering yet, there may be something clinically wrong with you (I am sorry to be the one to let you know – it really should be your family or your doctor that tells you these things). The flavor of the sauce is really difficult to describe in a way that even begins to do it justice. It’s sweet, it’s sour, it’s spicy – it’s marvelous. 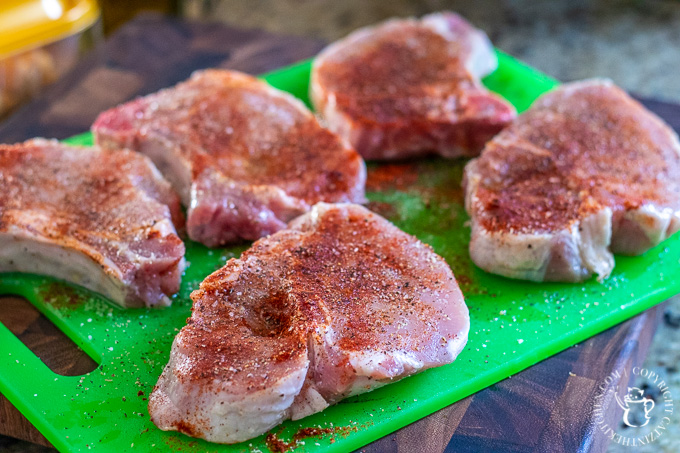 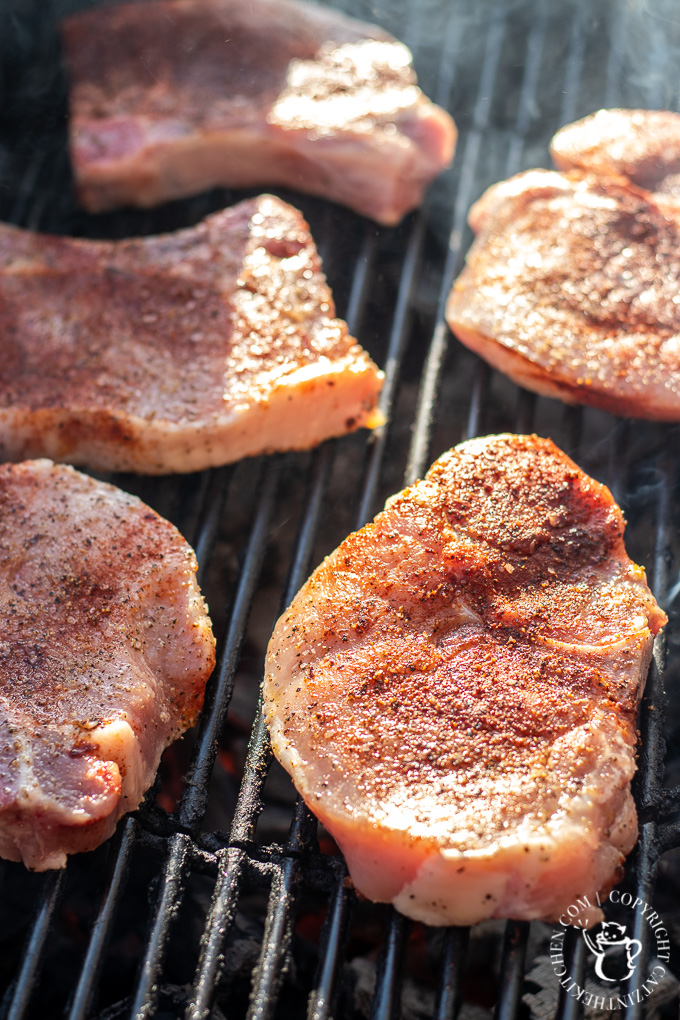 Believe it or not (and it is a little difficult to believe), I had never grilled pork chops before. I’m not sure why, other than to say that we just started eating pork chops in the last few months, and grilling season is just getting here. I chose bone-in, though I’m sure you could use boneless as well. The seasoning of the chops was very simple, and very flavorful. Seasoning with salt and pepper was a no-brainer, of course, but rubbing olive oil into the meat prior to seasoning was a nice touch that added a lot of tenderness and moisture to the chops, even after grilling them. 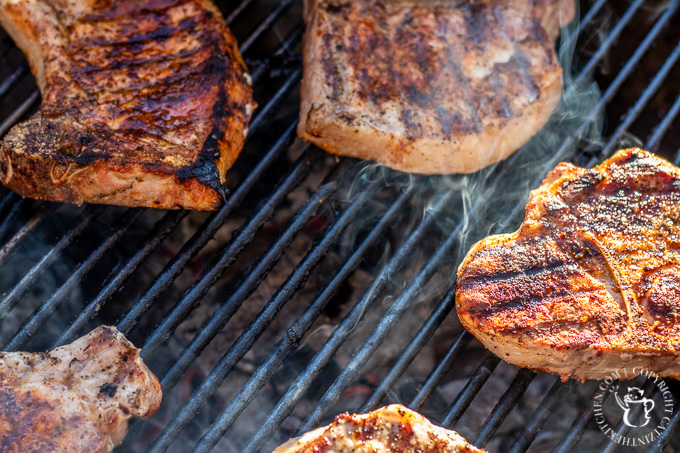 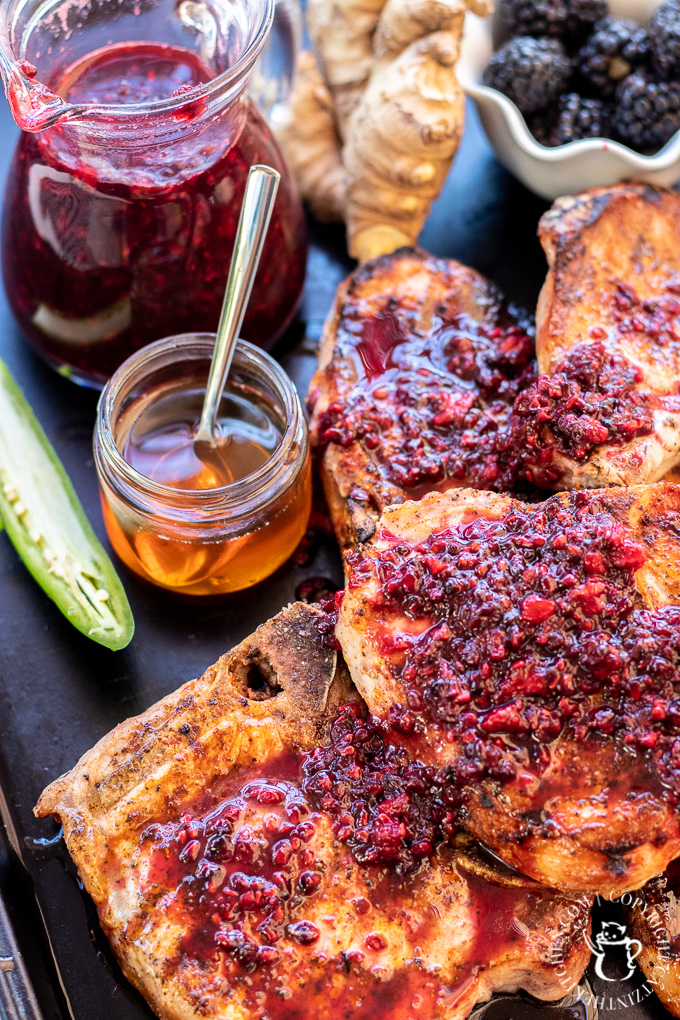 One tip before we get into the recipe itself. The original meal called for a whole Serrano chile. Knowing we would be serving two of these chops to small children, we cut it down to half a Serrano instead. That was almost perfect from a heat level standpoint, even for me (and I like spicy food). I think that the whole Serrano would have overwhelmed the sweetness of the berries, and, really, you want them to be the star of the show here! Last thought: if you are the one cutting up the pepper and scraping out the seeds, don’t take out your contacts afterwards. Oh, the pain…

[…] back in the good ole days (that would be 2013), we discovered this amazing and slightly spicy recipe for a savory blackberry sauce. At the time, of course, we were using it to douse pork chops […]