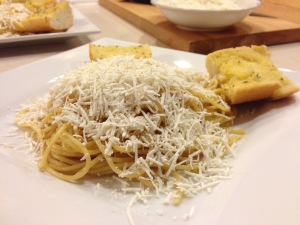 This dish owes its fame in modern times almost entirely to the Old Spaghetti Factory. In fact, in every menu at each of the chain’s 40 restaurants, there is a special section that propagates a legend that Homer lived on it while composing The Illiad. No offense, but I’ve read the Illiad, and I’m thinking Homer had a little something else in his pipe as well. Suffice to say, it’s a weird story. Regardless of whether or not the bit about Homer has any basis in fact, the cheese has an interesting enough history of its own. Myzithra (also spelled “Mizithra” or the Greek Μυζήθρα, if you prefer) has been made for thousands of years, almost exclusively on the isle of Crete, in the Mediterranean Sea, between Greece and Turkey. Depending on its salt content and the age of the cheese, it goes by a variety of Greek names. To the best of my knowledge, the most salted and most aged version of the cheese is the one traditionally used on pasta, known as anthotyros. The flavor is distinct – once you’ve tasted it, you’ll never mistake it for anything else. 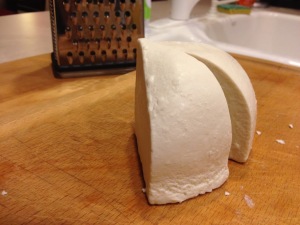 Myzithra, though, is only one part of what makes this dish unique. The other fascinating and unusual exercise one must go through before serving this Greek staple is that of browning butter. Now, browned butter has other uses, as I understand it, but I personally had never before had the opportunity to give it a shot. You know how when you cook something in butter in a frying pan, the butter will occasionally burn? It turns a dark brown color and smells rather awful, with lots of thick smoke. That’s not browning butter. Browning is the stage the butter reaches right before it burns, and, in my experience, getting it there was easier than it sounded. Once the myzithra is grated and the butter is browned, your dish is basically complete. Certainly, you’re going to need some pasta – spaghetti or angel hair seems to be the way to go – but it’s literally that simple. 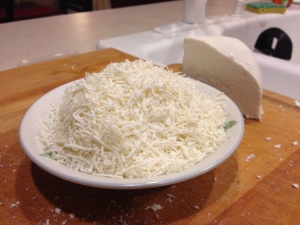 In preparing to make this dish, I had one primary goal – make it taste as similar as possible to Old Spaghetti Factory’s version. I love deconstructing restaurant food, though it usually takes a number of tries to get it right. Simply put, while not all of Old Spaghetti Factory’s dishes are my favorite (I’m not a big fan of their take on Fettuccine Alfredo, for example), this one is marvelous, every time. Because the only ingredients are pasta, myzithra, and browned butter, the only things you taste are…myzithra and browned butter, which needless to say, are flavors you simply don’t have the opportunity to taste everyday. I looked over five or six different recipes to try to decide the best techniques for browning the butter and assembling he ingredients, and pulled a bit from each. If you look for myzithra and browned butter recipes, you will find some that add a lot of ingredients – I would advise you to steer clear. I’m sure they’re quite tasty, but there’s no need to add complexity here. This is a dish that is about showcasing two unusual ingredients, and enjoying them on their own.
In the end, I was deeply pleased by the results. With all appropriate humility, this turned out exactly like Old Spaghetti Factory’s, and Chels and I are both thrilled to be able to have this favorite whenever we like! Before we get to the recipe, here are a couple of tips. First, grate the myzithra on the small side of your cheese grater. You want the cheese to be in light, thin pieces – a bit like grated parmesan. Where the browned butter is concerned, make sure to use enough – I used sixteen tablespoons. Use a small saucepan, never (never!) stop whisking (too slowly, and the butter will burn – too quickly, and it won’t brown), and as soon as the butter begins to turn a nice amber/caramel color, get it off the heat. Enjoy! 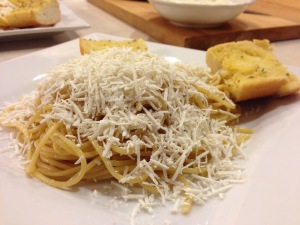