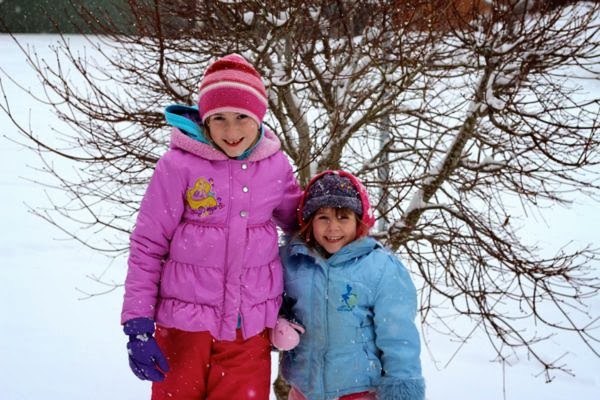 1. My snow bunnies! They played outside in the snow for HOURS!!! Josh and I thought they would last 10 minutes, but nope! They were out there all afternoon. And then Grace and I took a nice, snowy walk around our neighborhood. It was beautiful and fun to spend a little bit of time with just my oldest. It doesn’t happen often enough.

2. Downton Abbey Season 4- Episode 6: It was a heart-warming, heart-wrenching, gut turning episode. I adored the scene with Mary and Charles Blake getting water for the pigs and in the kitchen. It was great to see her let loose and she did it so well. Lady Edith…well…I’m so glad she had a change of heart. I really do want things to work out for her for once, but she seems to have a knack for being her own worst enemy sometimes. The storyline with Rose and and Jack Ross is very fascinating. I love that she could careless about the color of his skin or the simple fact that he is only a jazz singer and she is very privileged. She’s a bit like Sybil isn’t she…but maybe a little more spunky and reckless. I adored the scene near the end where The Dowager Countess and Isobel Crawley were playing cards. I think their personalities together are so funny to watch and how adorable that they were having so much fun playing cards. They could be really good friends to each other if they could allow themselves to stop being so critical of each other. Lest not forget about the whole Daisy/Ivy’Alfred love triangle! Wow…those three! And last but not least, poor Anna again. This girl cannot get a break and with the way things are going, the whole house is going to know what happened soon enough. I knew that slime ball was going to come back for another episode sooner than later. And now Bates KNOWS!!! Watch out world…Bates is gonna show some anger. My favorite quote of the evening was spoken between Robert and Mary. Robert-” Don’t be vulgar. What do you know of such matters?” Mary-“I’ve been married. I know everything.”

3. Josh left this morning in San Francisco. He’ll be back in Portland tomorrow, but I won’t see him until the evening. :( Business trips are never fun. Unless I get to go along too.

4. Favorite event of the Olympics? Mine, I’m a sucker for ice skating. Always have been and always will be.

5. I’ve begun drinking my tea without sugar. Not as hard as I thought the transition would be. But I can’t do it with my coffee. But I’ve been cutting back to a tsp of sugar the last few days and it’s acceptable. I’m just trying to train my tastebuds. 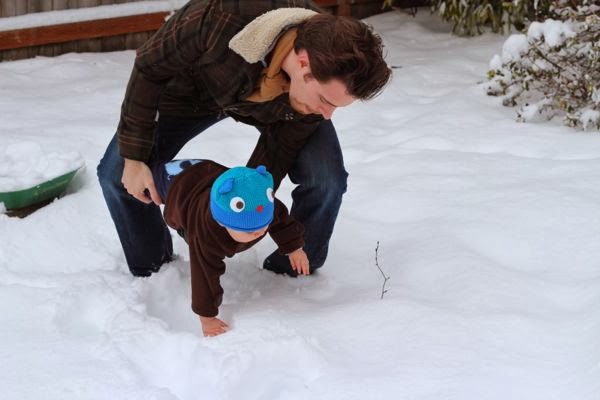 6. Christian’s first experience with snow. He liked catching the snowflakes on his tongue and thought the snow was shockingly cold (duh). New things he’s begun doing, he is incredibly fast crawling up the stairs…OMG-thank goodness for baby gates. AND he has started feeding himself with his fork at dinner! He then proceeds to drop the fork on the floor, but he’s getting there.

7. Anyone else think it’s kind of funny that JC Penney is back to store coupons and sales again. Yeah, I didn’t think their little stunt was going to last either.

8. I got Josh to eat a Garden Burger last night. And I think he kind of liked it! Go me! I happen to love them.

10. One last thing about the snow. I love it and now that it’s melting, I’m incredibly sad about it. It was so pretty and so much fun to play in and the birds loved it, our rabbit loved it, Noel was very curious about it and now that it’s all melting, everything is returning to normal. :( Thank goodness, my normal is something I love or I would really be in a tizzy. Yes, I said tizzy. #nojudgement

2) I totally agree with you- I LOVED the mud/pig thing (and seeing Mary COOK!) and I thought it was hilarious that Ivy caught them eating scrambled eggs in the kitchen at 4 am or whatever!! I'm relieved Mary knows about Anna now and I'm glad Bates knows too, but...eek that face was scary!

5) I can't believe my eyes!! You're drinking tea with no sugar and only 1 tsp in your coffee??? Who are you and what have you done with my "sweet" sister in love?? LOL good for you! I never thought I would like tea without sugar, but it's really pretty OK! I have some once in awhile for a treat.

10) I seriously enjoyed living vicariously through all of you last week with the snow. I remember a time when I rejoiced over snow! Now it falls and I'm like "meh." I still think it's absolutely magically beautiful when it first falls, but after awhile it loses its charm. Thanks for letting me enjoy it all over again with you and your darlings! And if you ever want to have snow again...we're just a few hours away! ;)

Well, there is still creamer in my coffee, so it's still plenty doped up! Haha! And you know I would take you up on the offer to go see you again. I love the snow!