Well, good evening. I, Joshua Rief (AKA Chels’s husband), am a humble guest to this particular blog (although you can check out my more typical literary endeavors at jsrief.blogspot.com), and I join you tonight to share my personal culinary specialty: tacos de pollo delicioso (AKA delicious chicken tacos)! No more AKAs, I promise (maybe).


As Chels has no doubt shared with you, we love to cook together. Occasionally, however, I also cook on my own. When that happens, it inevitably involves a couple of key ingredients (if it’s not breakfast, and it usually is) – the barbecue, many cheeses, meat, food of Latin origin, and lots of very hot oil. Either that or food of Tuscan origin. And, again, that’s when it’s not breakfast. So, really, there’s no rhyme or reason to it. Could be hotdogs. Drop the inevitability. The only certainty is that I will burn myself. Everytime. Ah, the sacrifices we make for the things we love.


So, tonight, I fired up the grill when I walked in the door. Es muy importante to preheat the grill properly. Normally, if I turn it on when I get home, by the time I have changed out of my suit and into sweats and a t-shirt, it’s ready to go. Chels was kind enough to marinate two generously-sized chicken breasts in our favorite mesquite lime marinade for an hour before I got home. As soon as I had el pollo on the grill, I prepared the essentials. By this, of course, I mean that I set the mood. Again, es muy importante. Your creation will reflect the mood in which it was created, so pay as much attention to this as your ingredients, temperatures, etc. With Pandora steadily cranking out the Fifties jazz (i.e., Sinatra, Martin, Nat King Cole, and, of course, Mr. Buble), you’re well on your way, but it doesn’t end with the music. Don’t cook in a dirty kitchen – that’s crazy-making, and fast. In this case, Chels had the kitchen sparkling before I even got there, but even if she hadn’t, cleaning it first is well worth the extra five minutes. Next, Chels poured us both a small glass of Barefoot Sauvingon Blanc (if you’re not already aware, Barefoot is a boon to aspiring wine aficionados on a budget), and I got to preparing the ingredients. 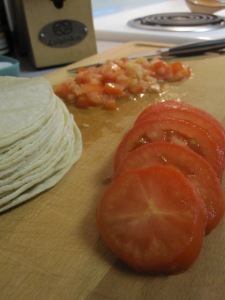 Now, if you think that the ingredient preparation is the beginning of the cooking process, you are gravely mistaken, at least where Mexican food is concerned. No, no, dear reader, we remain in the mood-setting stage. Once there are bowls of beautifully bright red diced tomatoes (I prefer Roma, but that’s your call), stunningly crisp and fresh green leaf lettuce, and tantalizing white and orange Monterey Jack and Cheddar cheeses available at your beck and call, then, my friends, you are ready to move on to the cooking. Truly, these bowls of brightly colored ingredients set the mood as much as Sammy Davis and Mack the Knife. Additionally, there is something inherently relaxing about prepared ingredients ready and just waiting to be doled out upon some delectable creation. 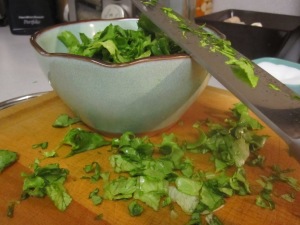 Now that the ingredients are ready to be distributed, the cutting board is re-cleansed in preparation for its impending date with some lightly seared chicken breast. Additionally, it’s about now that I place a high-walled frying pan on the stove top and begin to heat about a quarter inch of oil in it. Vegetable oil is definitely best (don’t even think about canola oil!), and a medium-low heat setting (4 out of 10) is perfect. While the oil heats (and no doubt prepares itself to injure me grievously), it’s time to retrieve the chicken.


El pollo has spent about six minutes on each side out on the barbecue, at a medium-high setting. The use of medium-high, versus traditional medium, sears the outside and eliminates all pink on the inside, while at the same time leaving the tender white meat inside soft and moist. Re-introduced to my best of friends the cutting board, the chicken is quite ready for some tender dicing with a very large and very sharp chef’s knife (just the sort of thing that will one day claim my fingers, no doubt). I recommend slicing the chicken into strips initially, and then dicing it across. And, don’t kid yourself, there is no possible way you can avoid eating some at this point. It simply isn’t going to happen, so save yourself a lot of time and self-loathing and just do it. Unfortunately, this is also the first time that the aroma arrives. Unfortunately, you say? Isn’t aroma part of your precious “mood,” you say? Had a bit too much of the afore-mentioned Sauvingon Blanc, you say? Au contraire, gentle reader. Because when the aroma arrives, so does everyone else who happens to be residing in your humble abode. The kids you may be able to fend off effectively, but do the same to your spouse at your own peril. Now that half your supply of chicken has mysteriously vanished, we move on. 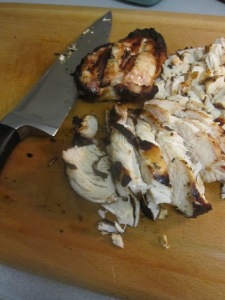 The oil is hot at this point, so use extreme caution (somehow I never retain that piece of advice). You can’t tell, of course, because oil is evil and wicked that way. If you are tempted to dip your fingertips in to test the heat, please do so, but sign this liability release waiver first, many thanks. Now, at this point, the preparation accelerates alarmingly, so before I continue, I always make sure that the family is gathered and ready to eat, the table is set, etc. Additionally, you will require a plate with two paper towels on it. Have another two paper towels ready to place on top of these, as well as a large lid of some kind to cover it all with. More on this later.
I use six inch white corn tortillas (Costco, $4 for 100 – seriously). After doubling them up, I place them in the oil. If my pan is big enough, I place two (actually four – doubled up, as you may recall) next to each other. After about five seconds of bubbling in the oil, the diced chicken goes in a line down the middle of the tortillas. Another five seconds, and then I fold them over the chicken into a more traditional taco shape (finally!). If you’re wondering, I’m not doing this with my fingers – I really was joking about that (although I get burned anyway). Rubber-tipped tongs are perfect (Ikea!). Another five seconds folded over, and you’re ready to lift each taco up individually, tip it slightly to let the excess oil run out, and place it on the previously prepared plate topped in paper towels (“Ah-ha!” you say!). Immediately cover the tacos with the remaining paper towels, and cover them with the lid (“It all makes sense now!” you say!). 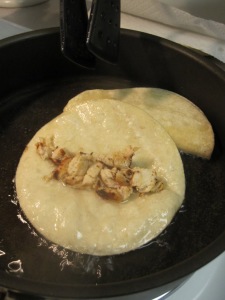 You really can’t get more than four done before they must be served. Four at the most. Four is pushing it. The key here is serving them hot. If you don’t serve them hot and fresh out of the pan, dump them down the garbage disposal or feed them to your dog. Seriously. Well, maybe not the dog, as the oil content might not be great for Fido’s digestive system. Same with the garbage disposal, actually. Okay, fine, eat them, but they won’t be as good. Point made?


Place the tacos two to a plate, and open them back up. Top generously, in the following order (no messing with this…): cheese (generously, remember), tomatoes (lots and lots – they furnish the moisture here), and lettuce (need I really say it? Generously!). They are delicious if you stop here, but I personally recommend topping the whole thing off with La Victoria Medium Chipoltle Taco Sauce. Chels uses La Victoria’s Mild Red Taco Sauce, so each to his (or her) own. At this point, you’re ready to eat – but don’t forget, you’ve only made four. Based on past experience, you will remain chained to the stove as your many minions clamor for more. I can’t emphasize strongly enough that, much like good waffles or pancakes, they must be eaten fresh out of the pan, even if it results in an evening of indentured servitude. At the end, you will be rewarded with four tacos of your own, so it will all be worth it. Make somebody else do the dishes. 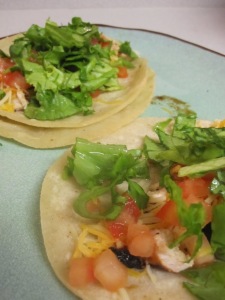 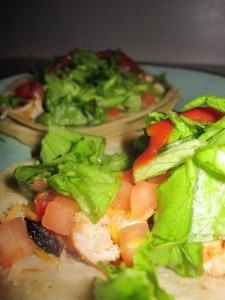 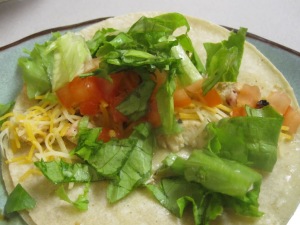 This was FABULOUS! Although we ended up using yellow corn tortillas it was still absolutely yummy! Love love love the sauce and the entire thing! Thx

Heehee, it was my pleasure to have him blog. I throughly enjoyed his writing myself. He even had a lot of fun. He said he would do it a lot more. :) So stay tuned ;)

Love this! Thanks for giving Josh the pen for tonight! :) :) I'll have to try these sometime, although I tend to be very afraid of hot oil as well.