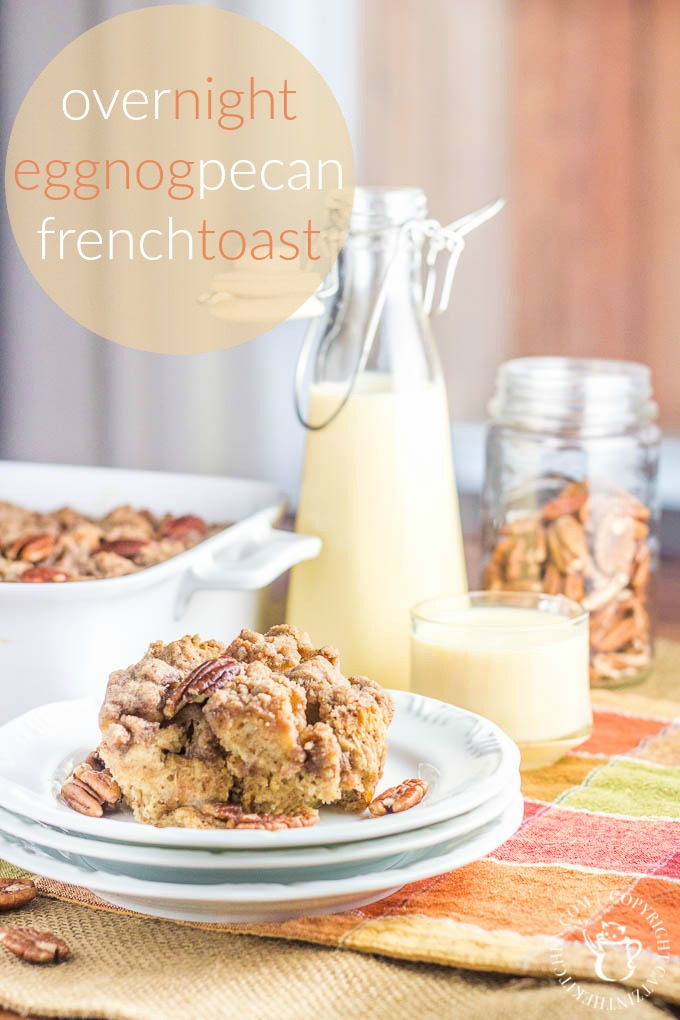 This post originally appeared on the blog in November of 2013. We’ve changed up the recipe a little bit and updated the photos, but it’s still just as yummy as ever, and the perfect brunch for any post-Thanksgiving company you may be entertaining over the weekend!

I told you we blogged about French Toast a lot. Obviously, I wasn’t kidding. I think we’re going to change the name of this blog to French Toast in the Kitchen, possibly a more appropriate title, since we don’t really write about cats very often. However, to keep the funky spelling in play, it would probably need to be Phrench Toast, but that’s a whole new conversation…

Actually, what’s remarkable about this particular overnight eggnog pecan French toast recipe is that it’s Chels’s invention, created almost immediately after complaining that we were eating too much French Toast. Seriously, I could eat variations on my favorite national toast each and every Saturday morning (or early afternoon), but Chels does get tired of it when we make too many recipes too close together. And, frankly, that happens during the holiday season, what with Cinnamon Apple Spice French Toast, Egg Nog French Toast, and Pumpkin Pie French Toast all begging to be made during the late fall and early winter months. At any rate, what inspired her to create a new French Toast recipe in the midst of French Toast burnout is beyond me, but here it is, and it’s fantastic. And I am anything but burnt out (insert “MOAR FRENCH TOAST” meme here). 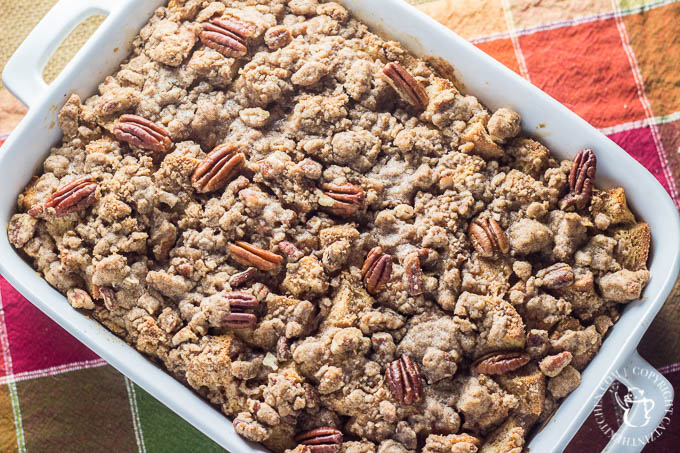 We’ve brought you baked French Toasts in the past. They aren’t complicated, but it is important to have the right bread and not to rush them. In this particular case, we decided to use whole wheat French bread from our local supermarket bakery (because it was on sale), which meant adjusting the recipe to accommodate the tendencies of whole wheat French – namely, it is normally drier and coarser, but holds its shape and body better (than white French). In theory, it’s also healthier, so that’s the recipe we’ll present you with here, but if white French is what you have, it’s probably a good idea to cut your egg nog down just a bit – perhaps by a half cup – to avoid mushy French bread. 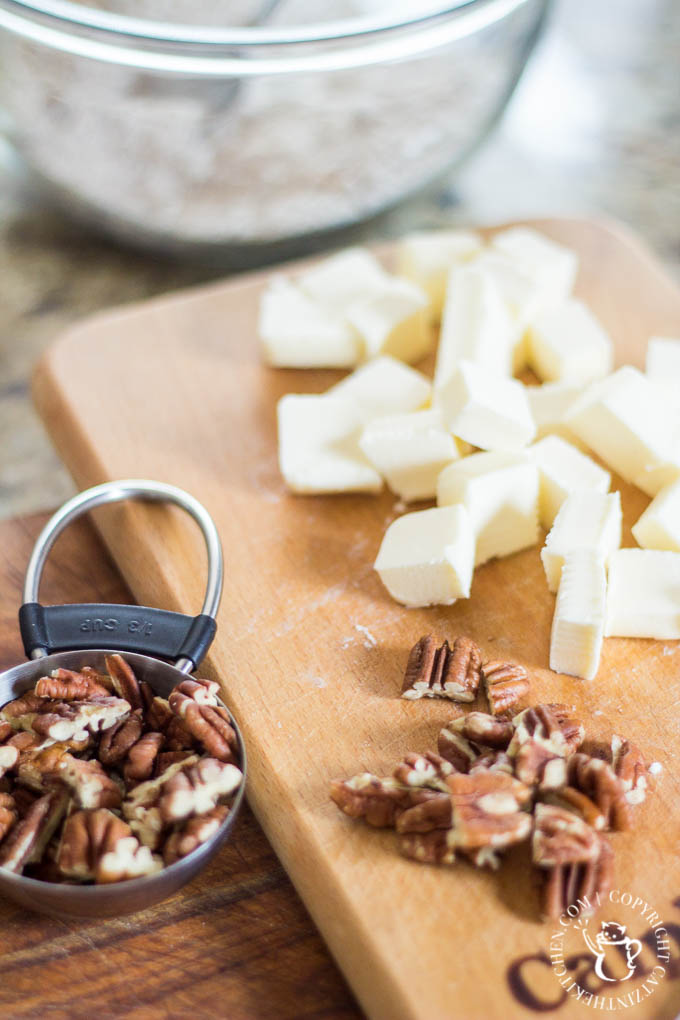 And, again, don’t rush baked French Toast. It’s wonderful, but it needs a night in the fridge to really soak in the moisture. If you wake up in the morning and really need your French Toast fix, make one of the other, faster, more on-the-spot recipes mentioned above – make this one when you have the time. Of course, this isn’t time in the traditional recipe sense. It won’t take long to make this at all – and in the morning, you’ll have a meal that’s basically ready to pop in the oven, which is especially nice on holiday mornings when you’ve got a lot going but still want to be able to serve a warm, indulgent, festive offering to your family and guests.

A final note – we baked this in a glass 9 x 13 baking dish, but you could (and possibly should) use ramekins if you have enough of them available in a large enough size (we didn’t). Though it bakes up very nicely in the baking dish, we suspect that it would rise even more and be even a bit fluffier baked in a three inch (or so) ramekin. If you try it, let us know! 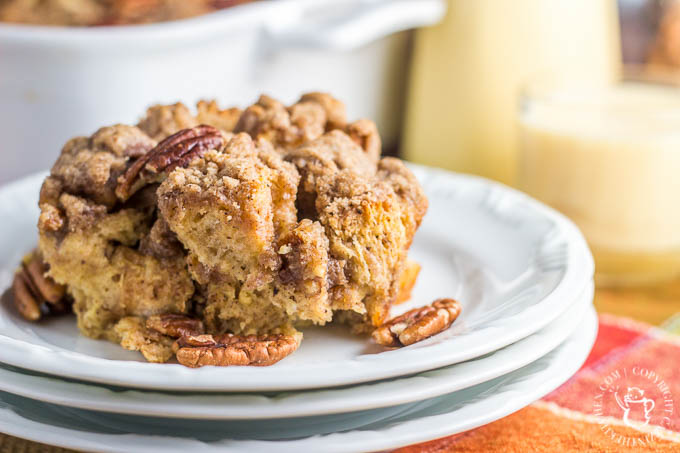 […] Soak your bread in egg nog the night before and simply bake the French toast in the morning for a delicious winter brunch. By Chelsia Rief […]

Wow! This looks really really delicious. I tried an overnight French toast for Christmas that really wasn't that great. Your pictures have me thinking I should have tried yours instead! Coming to you from Tastespotting. And definitely use Phrench if you change your name. :) Pinning this and following you on social media. :)

I'm so sorry that your other recipe you tried out wasn't that great. :( This one is really yummy though! Thanks for the comment and the following :) I Hope you have a wonderful weekend!

Love this! I love eggnog flavored anything - especially breakfast!

Yes!!! Eggnog is the best in breakfast!

Yum!!!! I just love french toast bakes so much!!! Eggnog is the perfect one for this time of year!!!